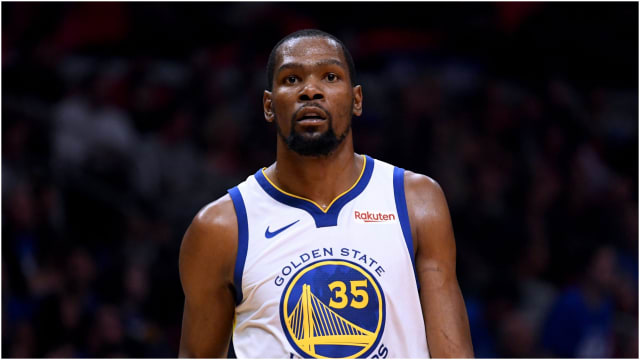 The Brooklyn Nets should now be considered the leading candidates in the race to sign Kevin Durant in free agency, according to his friend and former team-mate Kendrick Perkins.

Durant can become an unrestricted free agent if he declines his $31.5million option with the Golden State Warriors and he has long been linked with the New York Knicks, as well as the Los Angeles Clippers.

But reports have suggested the Nets are increasingly growing in confidence as the race to sign the 30-year-old, who ruptured his Achilles in this month's NBA Finals, intensifies.

And Perkins, who played with Durant at the Oklahoma City Thunder between 2011 and 2015, added weight to that speculation.

Free agency begins on June 30 and Durant's situation is an intriguing one after his surgery, with Warriors coach Steve Kerr, who wants to keep the 10-time All Star, saying it is likely he will miss all of next season as he recovers.

The Nets have also been linked with Kyrie Irving, Kawhi Leonard and Tobias Harris.