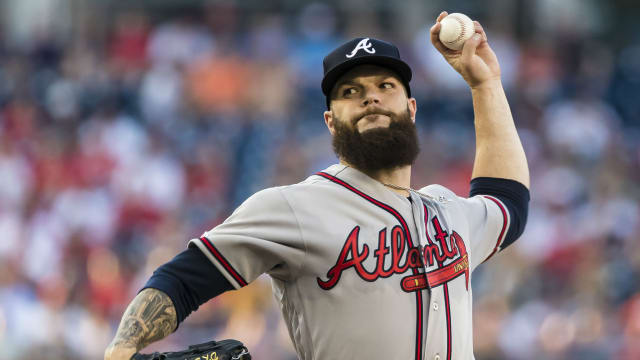 Dallas Keuchel's Atlanta Braves debut ended in defeat to the Washington Nationals in MLB on Friday.

Keuchel was pitching in an MLB game for the first time since last year's American League Championship Series. The Cy Young Award winner's debut lasted five innings as he gave up eight hits and three earned runs while striking out three in a 4-3 loss.

Once Keuchel shakes off the rust, he will hopefully live up to the expectations Atlanta had when they signed the lefty to help cement their place in the National League (NL) East.

The Braves, who built a small cushion at the top of the division, still hold a 4.5-game advantage over the second-placed Philadelphia Phillies. But it is the Nationals who are hitting their stride at the right time. Washington, who sit in third place, have won five consecutive games and nine of 12. A few more wins and the Nationals could catch up to the Phillies and put pressure on the Braves.

Their win on Friday was highlighted with a home run off the bat of Yan Gomes. It was just his third of the season. Anthony Rendon had the go-ahead RBI in the fifth inning to reach the game-winning total.

Stephen Strasburg was awarded the win after six innings of work where he allowed five hits and three earned runs while striking out five.

Freddie Freeman has been on fire. The Braves first baseman joined Andruw Jones as the only players with the franchise to have at least one RBI in nine consecutive games since they moved to Atlanta in 1966.

Joe Musgrove gave up just five hits in seven one-run innings in the Pirates' 2-1 win over the San Diego Padres. He moved to 5-7 this season as Pittsburgh picked up their fourth win in six games.

It was a heck of a game for Jeff McNeil. The Mets' leadoff man made his first career start in right field and he hit a home run and drove in three as New York squeaked by the Chicago Cubs 5-4.

Walker Buehler had a career game as the Dodgers faced the Colorado Rockies. The righty had a career-high 16 strikeouts in nine innings of work. It was the most strikeouts by a Los Angeles pitcher under 25 since Ramon Martinez had 18 in a game in 1990. It was also the most innings he has pitched all season.

The Phillies could have used some help from the middle of their lineup but Jay Bruce went 0 for five at the plate and J.T. Realmuto followed that up with an 0 for four game – his fourth straight hitless game. Philadelphia went on to lose 2-1 to the Miami Marlins.

Gary Sanchez hit a dinger. His 481-foot home run is the fourth longest for a New York Yankees player in the Statcast era.

There must of been something in the air on Friday, because the homers were going the distance. Texas Rangers outfielder Nomar Mazara tied the record for longest home run in Statcast history with a 505-footer.

Boston are hoping this is the start of another winning streak. The Red Sox went the distance with the Blue Jays on Friday and won on a walk-off home run in extra innings. It was the team's second straight win. Boston will send Brian Johnson (1-1, 10.00 ERA) to the mound as they try to keep up with second-placed Tampa Bay in the American League East.