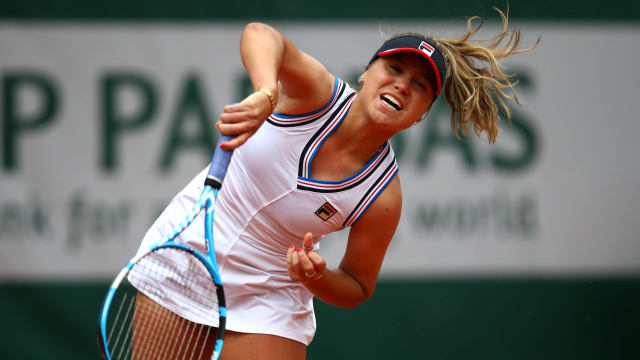 World number 12 Sevastova won this WTA International tournament two years ago, a victory sandwiched by defeats to Caroline Garcia and Tatjana Maria in 2016 and 2018 respectively.

But her record of reaching every final since the event's inception came to an end on Saturday as Kenin won 6-4 4-6 6-2 to advance to a showdown with Belinda Bencic.

Having broken for a 2-1 lead in the first, Kenin saw three set points go begging on the Sevastova serve at 5-3, but a subsequent hold saw her edge in front before the American again took the early initiative in the second.

Sevastova roared back from 4-2 down, though, reeling off four straight games to force a decider. Kenin swiftly rediscovered her poise and raced 4-0 ahead before securing a place in her third Tour final of 2019.

"Next match will be really tough and I'm just going to go out there and play my best." @SofiaKenin#MO2019pic.twitter.com/pwb5hwy4iV

Awaiting her there is Bencic, who fought back from a set down to defeat reigning Wimbledon champion and top seed Angelique Kerber 2-6 7-6 (7-2) 6-4.

The German eased through the opener thanks to a pair of breaks and, after both women dropped serve in successive games towards the end of the second, Bencic surged clear in the tie-break, winning five straight points from 2-2.

Having rescued three break chances in her first service game of the decider, world number 13 Bencic broke Kerber immediately and that advantage proved enough to see her through to her second final of the year, having triumphed at the Dubai Tennis Championships in February.