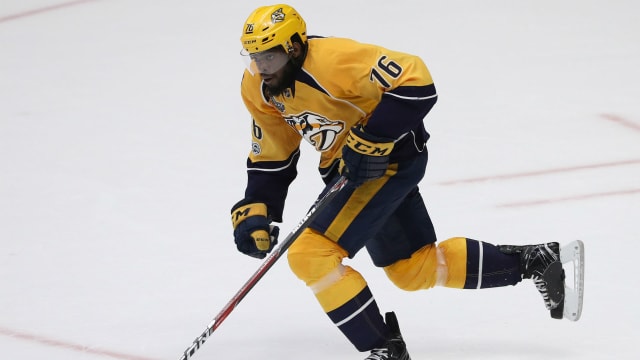 The New Jersey Devils have acquired defenseman P.K. Subban from the Nashville Predators, both teams announced on Saturday.

Subban's $9million cap hit had been the highest on the Nashville roster. That had led to speculation he might be dealt, but the Montreal Canadiens and Vancouver Canucks had been viewed as the two most likely destinations.

The 30-year-old Subban, who won the 2013 Norris Trophy as the NHL's top defenseman, spent three seasons in Nashville after starting his career in Montreal. He helped lead the Predators to the Stanley Cup Final in 2017.

"We had to make a business decision. With an aim at strengthening our forward corps this offseason, and with the continued strength of our defensive group, we felt it was necessary to clear up salary cap space this way," Predators president of hockey operations and general manager David Poile said in a statement.

"We appreciate P.K.'s contribution to the Predators and the Nashville community over the past three seasons, which have seen our organisation have unprecedented success."

The #NJDevils have acquired defenseman P.K. Subban from the Nashville Predators, in exchange for Steven Santini, Jeremy Davies, and two second-round picks (the 34th overall this season and the team's 2020 second-rounder).