Big-hitting Brathwaite shows the fine line between pleasure and pain 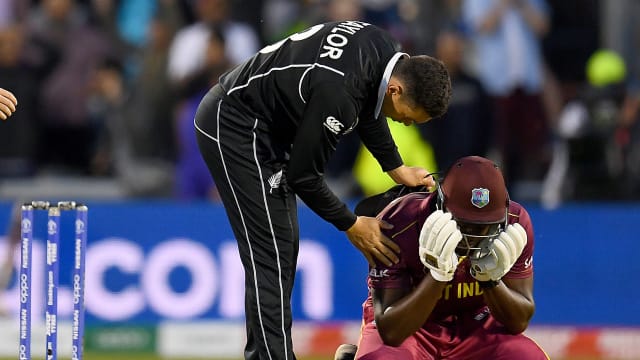 In the 2016 World Twenty20 final, Carlos Brathwaite faced the first ball of the last over. His side needed 19 runs to win and Brathwaite hammered four sixes in successive balls, steering West Indies to the most unlikely of victories.

Three years on, Brathwaite was again trying to do the near-impossible for his country on the big stage.

He walked into a baptism of fire at Old Trafford, facing a Lockie Ferguson hat-trick ball, but defended it before finding the boundary from the very next delivery. But the wickets kept on tumbling, part of a collapse that saw West Indies go from 142-2 to 164-7 in pursuit of a victory target of 292 against a New Zealand side who had started the Cricket World Cup in excellent form.

Those five wickets fell in as many overs and the only way of keeping the smallest chance of victory alive was to consolidate, so Brathwaite got to work. He took only three singles in a 17-ball spell and it took a Mitchell Santner delivery that was just asking to be hit for six to snap Brathwaite out of his funk. He duly obliged, sending it 96 metres, but showed the restraint and temperament so many of his team-mates lacked, by putting the cue back in the rack, at least momentarily.

Carlos Brathwaite's maiden international century went in vain, but it made for a thoroughly entertaining #CWC19 contest!

His knock in a look pic.twitter.com/smr2FlOjIV

Brathwaite batted for more than 11 overs with Kemar Roach, the latter departing with the score on 211. Another handy partnership followed with Sheldon Cottrell, the left-armer adding 15 runs to a terrific performance that included four wickets, two catches and a run-out. Cottrell even hit two fours in successive deliveries in the 43rd over, but when Ferguson claimed his 14th scalp of the World Cup, bowling Cottrell, West Indies were 245-9 with just five overs left.

Needing 47 more runs for victory, out strode Oshane Thomas, a number 11 batsman in every sense of the word, a man with just 14 runs to his name in 22 international appearances. West Indies were gone. Surely.

Not for the first time, Brathwaite had other ideas. He hit the next delivery for four, smashing Trent Boult – who snagged four wickets for New Zealand – over mid off, and showed faith in Thomas, taking a single from the third ball of the over. The next over followed a similar tune, Brathwaite hitting one boundary, this time a six, and leaving Thomas to see out the over.

The equation was getting tougher and tougher, 33 runs still required from the last three overs, with just one wicket in hand, but Brathwaite has previously showed he does not mind when the odds are stacked against him.

An over reminiscent of that 2016 decider was to follow, too, with Brathwaite taking a two off Matt Henry before clobbering three sixes in a row, over long on, backward point and long off respectively. Then he top-edged Henry for four and finished with a single, keeping the strike in a 25-run over that got fans across the world out of their seats. The impossible was now possible.

As is so often the case in these types of run chases, the last few runs always seem the hardest, and so it proved.

Jimmy Neesham beat Brathwaite not once, but twice, before the latter pulled out to deep mid-wicket for two runs that took him past a century, his first at one-day international level. It is possible, but difficult, to imagine Brathwaite scoring a better ton in the remainder of his career, but the job was not done.

His job isn't done yet though. West Indies still need six to win, from eight balls, with one wicket in hand.

Would Brathwaite take the single to keep the strike, or would he go for glory? Unsurprisingly, he chose the second option. And as he swung hard and hit Neesham over mid-on, it looked like it was the right option. He did not middle it but a man that powerful can easily clear the boundary without doing so.

The Old Trafford crowd roared, expecting the ball to sail for six, while television viewers waited as the ball hung in the air and Boult, stationed on the deep mid-wicket boundary, came into view. And Boult did brilliantly, not only taking a fantastic overhead catch, but stopping himself from going over the boundary to give New Zealand a dramatic, thrilling five-run victory. Big celebrations in the outfield followed as a shattered Brathwaite slumped to his knees.

If his shot had travelled an extra two metres, West Indies were victors, but Brathwaite and his men quite literally, just fell short. It is, after all, a fine line between pleasure and pain.