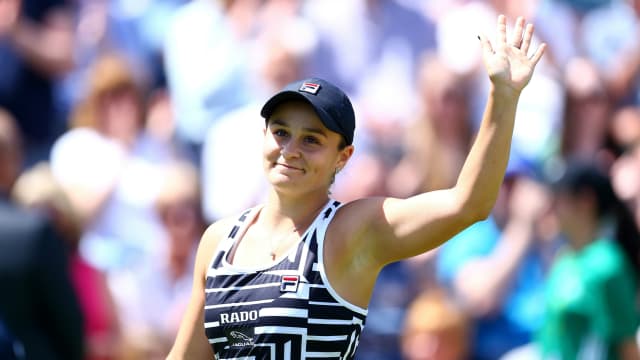 Ashleigh Barty moved within one win of tennis' coveted number one ranking after beating Barbora Strycova in straight sets in the Birmingham Classic semi-finals on Saturday.

Just a fortnight after her breakthrough grand slam success at the French Open, Barty edged closer to another milestone with a 6-4 6-4 win against the world number 51.

She will face German Julia Goerges in Sunday's decider, the German also needing just two sets to see off Petra Martic of Croatia.

In a bizarre twist, Barty and Goerges will play together less than 24 hours before the final, the pair set to meet Anna-Lena Groenefeld and Demi Schuurs in one of two women's doubles semi-finals.

Barty will usurp Naomi Osaka as the new world number one if she beats Goerges, a victory that would see her just become the fifth Australian - man or woman - to top the rankings and the first female in 43 years.

She beats Barbora Strycova 6-4 6-4 to advance to the final in Birmingham!

She's one win away from world No.1.#NatureValleyClassic#GoAussiespic.twitter.com/xJLGqEMrT9

The 23-year-old entered her clash against Strycova on the back of 10 successive wins and she produced the first break in the match's fifth game.

It was not all one-way traffic, though, Barty forced to save break points on three occasions in the opener.

But she served superbly in the second set, firing 10 aces and winning 86 per cent of points on first serve.

Strycova kept things level until 4-4, when she was broken easily, and Barty comfortably served out to secure her spot in the final.

"I served really well in the second set to keep in touch and knew I needed to take my chance when I got one," Barty said afterwards.

"On grass, she is very effective and it was important for me to get on top on my rallies and use my forehand as much as I could."

Goerges' clash with Martic was a similar affair, a tight first set only settled by the one break of serve.

Martic, ranked 25th, just six places below her opponent, was then broken in the first game of the second set only to immediately produce a break of her own.

It set the tone for an exciting set but Goerges eventually prevailed 6-4 6-3.