Tsitsipas hails Auger-Aliassime as 'most difficult opponent' after Queen's loss 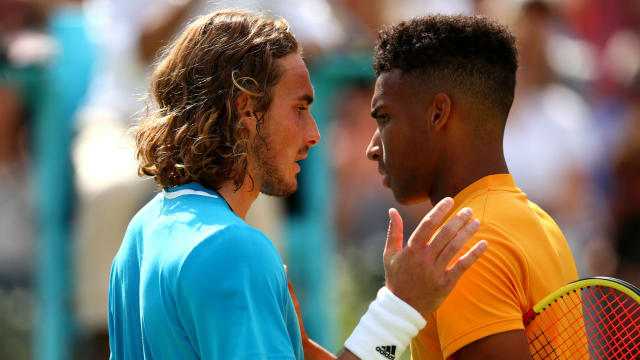 Stefanos Tsitsipas waxed lyrical over Felix Auger-Aliassime after the sensation knocked him out of the Queen's Club Championships, describing the teenager as the most difficult opponent he has faced.

Auger-Aliassime made further waves ahead of Wimbledon by becoming the youngest man to reach the semi-finals at Queen's since Lleyton Hewitt in 1999 with a 7-5 6-2 defeat of Tsitsipas on Friday.

Canadian Auger-Aliassime was a beaten finalist in his first tour-level grass-court tournament in Stuttgart last week and made another statement by claiming the scalp of top seed Tsitsipas in London.

The 18-year-old also beat Tsitsipas at Indian Wells this season and the world number six believes the rising star may be too good for Novak Djokovic, Rafael Nadal and Roger Federer.

He’s the youngest man to reach the #QueensTennis SFs since Lleyton Hewitt in 1999. pic.twitter.com/Vrm1TD9ZKf

Tsitsipas - who has already beaten Djokovic, Nadal and Federer - said: "He's the most difficult opponent I've ever faced, and I think it's gonna take a couple of tries to beat him.

"I only beat him in doubles. I don't even count that one, because doubles is doubles. He has the whole package to play big, to beat – I'm sure if he ever gets the difficult chance to play Nadal, Djokovic or Federer – he's going to beat them, for sure.

"I will not be surprised if he gets wins over those guys. We will definitely see him in the top five. Maybe not this year but next year or the year after. I would expect something like this."

Auger-Aliassime will now face Feliciano Lopez in a battle between youth and experience after the Spaniard defeated sixth seed Milos Raonic 4-6 6-4 7-6 (7-5).