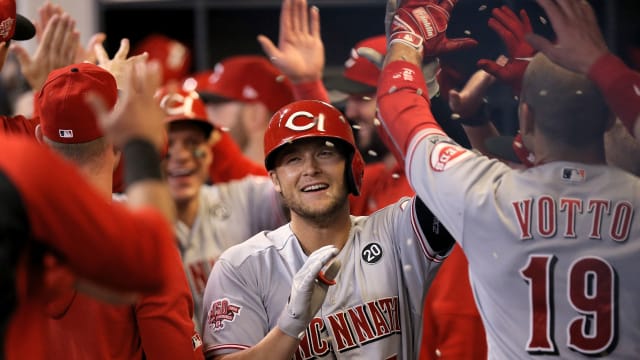 The Cincinnati Reds eased past the Milwaukee Brewers 7-1 to extend their winning streak in MLB.

Nick Senzel hit his seventh home run of the season and the streaking Reds are just five-and-a-half games adrift of the Chicago Cubs in the National League Central.

The Reds only trail the New York Yankees for the longest active win streak in MLB. The Yankees won their sixth straight game with a 10-6 victory over the Houston Astros.

Cincinnati sport the third-best team ERA in MLB (3.53) and have allowed a mere 11 runs in their last five games.

The Cubs, St Louis Cardinals and Brewers better be careful or the Reds could sneak up on them and take this division away.

Texas Rangers starter Mike Minor continues to dominate as he tossed eight one-run innings in a 4-2 win over the Cleveland Indians.

Arizona Diamondbacks centerfielder/shortstop Ketel Marte went four for six with a run scored in a 6-4 loss to the Colorado Rockies.

Giancarlo Stanton posted his first three-hit game of the year while scoring two runs as the Yankees topped the Astros.

Philadelphia Phillies starter Nick Pivetta gave up six earned runs in 5.3 innings of a 7-4 loss to the Washington Nationals.

McKinney with the walk-off winner

It is Dallas Keuchel's (0-0, 0.00 ERA) Atlanta Braves debut. He will be taking on Stephen Strasburg (7-5, 3.75 ERA) for the Nationals. It is a nice little division rivalry and a preview of what might come for Atlanta.