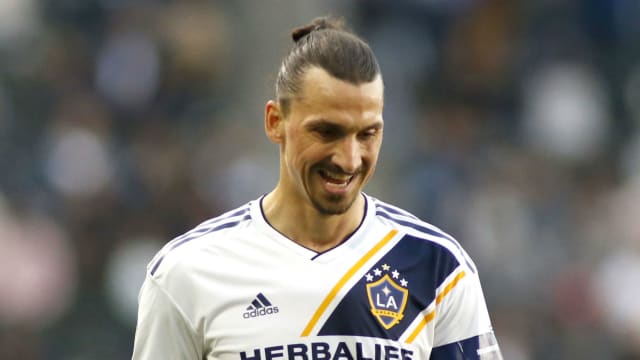 Zlatan Ibrahimovic and Wayne Rooney have both missed out on the MLS mid-season Team of the Year.

Neither have made the cut, however, in the Opta-powered team of the season so far.

Carlos Vela and Ezequiel Barco are the headline acts in the XI, but who else has been included?

89 - Zlatan Ibrahimovic is averaging a goal approximately every 89 minutes in league play, the best of any #MLS player with 10+ goals since 2007. Preeminent. pic.twitter.com/HnE5eMkpgM

Bill Hamid's return to MLS and DC United has gone as well as – if not better than – anyone could have hoped. Among goalkeepers with eight or more appearances this season, he leads the league in save percentage (78.8 per cent), is second in saves per game (four) and clean sheets (seven). He is also tied for third in average goals against (1.1) and fourth in goals prevented (3.9).

A member of the surprising Philadelphia Union, 29-year-old Gaddis has started all 17 of his team's matches and played a total of 1,466 minutes – only five outfield players have more. He is one of 12 defenders to have played more than 1,350 minutes this season and one of just four of those players to not make a single mistake leading to a shot.

Switching to MLS has not been much of an issue for the 25-year-old Argentinian centre-back, who has thrived in the middle of Vancouver's defence. He is one of 19 defenders to have been dribbled past three times or fewer (minimum of 1,000 minutes played), is tied for third in blocked shots (16) and tied for fifth in clearances (70).

The 27-year-old Argentinian has been a stalwart member of Atlanta's backline since his debut, and 2019 has been no different. He has been a part of all of the Five Stripes' MLS-leading eight clean sheets and leads all defenders with 139 possessions won. He is also one of 15 players with an aerial success of 66 per cent or better (from a minimum of 45 aerial duels).

Thank you so much to Atlanta fans and MLS fans for choosing me for 2019 MLS All-Star!! I’ll see you there! @mls @atlutd

Adnan's attacking ability from the back has been critical for Vancouver in 2019. He is one of only three defenders to have completed 20 dribbles and create 10 or more chances this term. On top of that, he is one of four defenders with 100 or more duels won, and the Whitecaps concede more than double the amount of goals per 90 minutes with him off the pitch (0.9 goals conceded per 90 with Adnan on the field, 2.1 per 90 without him).

The Mexico international has become arguably the most intimidating midfield force in MLS this year. He has won a league-best 155 possessions and has 94 tackles and interceptions – no other player has more than 75. Look no further than the club's numbers with Dos Santos on the pitch for his value to the Galaxy. They average 1.4 goals and one conceded per 90 minutes with him playing. By comparison, they score 0.5 goals and let in 2.1 per match without the Mexican.

While Carlos Vela gets most of the plaudits for LAFC's success, midfielder Eduard Atuesta has played a vital role linking the offence and defence together. He is the only player averaging more than 100 touches per game (101, to be exact) and is one of two players with more than 150 possessions won. He also has impressive passing statistics, with an overall accuracy of 87.5 per cent and 75.8 per cent in the final third.

The easy decision for mid-season MVP, Vela leads MLS in goals with 16 (five more than any other player), assists (10), shots (87 – 26 more than the next best), shots on target (35) and minutes per goal among players with five or more goals. The only question at this point is; how many records will the Mexico international break this year?

26 - #LAFC forward Carlos Vela has 26 goals+assists through 16 games, 11 more than Sebastian Giovinco had through 16 games when he set the #MLS single-season record in 2015 with 38. Inconceivable. pic.twitter.com/9jf2GyVI3D

The club's lone designated player has lived up to the billing during his first year in New England. He has had a hand in just under half of the Revolution's goals this year (four goals and four assists) and has been an effective pest in the final third, where he has won possession 31 times – eight more than any other MLS player.

Stepping out of the shadow of Miguel Almiron, the 20-year-old has four goals and one assist in eight appearances this year and was coming into his own before leaving for the Under-20 World Cup. He is one of eight players averaging at least three chances created per 90 minutes (3.1) and is one of 12 players to have an xG [expected goals] record of at least two (2.4, tied with Vela for sixth best).

The 28-year-old Peruvian is enjoying his first full season in Seattle, scoring six goals in 10 appearances this year. He boasts a 35.3 per cent shot conversion rate (the second highest among players with six or more goals) and is scoring once every 119 minutes, record bettered by only three players who have netted at least six times. It does not hurt that 20.3 per cent of his touches have come inside the opponent's box this season, the second highest in the league.