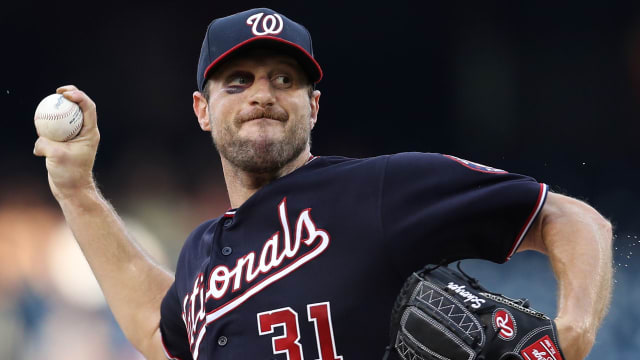 Max Scherzer produced one of the most astonishing performances of the MLB season in the Washington Nationals' 2-0 win over the Philadelphia Phillies.

Scherzer took the bump and tossed seven shut-out innings while striking out 10 in Wednesday's victory. He also probably should not have even been pitching.

In an unfortunate accident during batting practice on Tuesday, Scherzer fouled a ball off his face on a bunt attempt and broke his nose, which was left crooked and mangled and his eye blackened after the incident.

Any normal pitcher would have taken the next day off. But, Nationals ace Scherzer is not normal.

The Nationals have underachieved this season. Yet, Scherzer has been his normally awesome self, going 6-5 with a 2.62 ERA with 146 strikeouts in 106.3 innings.

That success and the Nationals' struggles have teams poking around Washington, with pundits suggesting the three-time Cy Young winner could become available.

Scherzer, however, clearly does not want the struggles to continue. His win in a dominating performance over the Phillies helped Washington move to 35-38 for the season and within four games of the Phillies, who are 3-7 in their last 10 games.

The Nationals also beat Philadelphia 6-2 in the first game of Wednesday's doubleheader.

If the Nationals get back into the playoff race they likely will not sell and Scherzer will probably stay. He did his part to get them as close to the race as he could midweek.

Franmil Reyes went three for four with a three-run homer that put the San Diego Padres ahead of the Brewers 8-7 in the seventh inning. That is the way the game ended.

Pittsburgh Pirates rookie Bryan Reynolds went three for four with a three-run homer that gave his team a lead in the sixth inning and an eventual 8-7 victory against the Detroit Tigers.

Tampa Bay Rays pitcher Blake Snell gave up six earned runs in 0.3 of an inning in a 12-1 loss to the New York Yankees.

Vladimir Guerrero Jr. showed off his athleticism with this leaping grab in the Toronto Blue Jays' 11-6 defeat to the Los Angeles Angels.

It is a sneaky good matchup both in this game and on the mound. Shane Bieber (6-2, 3.92 ERA) will take on Cy Young candidate Mike Minor (6-4, 2.63). The Indians and Rangers are two evenly matched teams that both have definite chances to make the playoffs this year. They may in fact battle each other for the second wild-card spot. Every single matchup between the two teams matters.