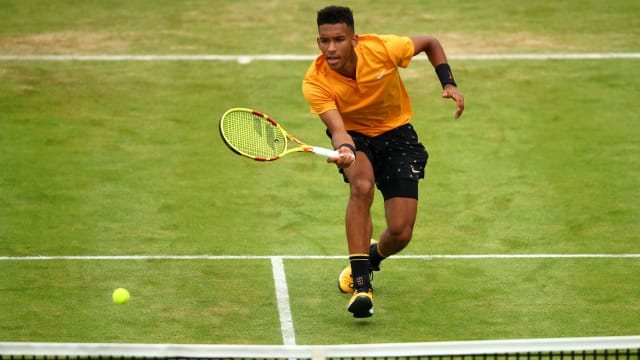 Felix Auger-Aliassime sealed a second win of the day at the expense of Nick Kyrgios to reach the quarter-finals of the Queen's Club Championships and Diego Schwartzman knocked out defending champion Marin Cilic.

Kyrgios exchanged words with a chair umpire and peered over the fence at another match during a changeover before completing a 7-6 (7-4) 6-3 first-round victory over Roberto Carballes Baena on Thursday.

The Australian also reportedly berated himself for staying up until 3am playing a computer game on an eventful day in which he eventually bowed out with a 6-7 (4-7) 7-6 (7-3) 7-5 loss to Auger-Aliassime.

Auger-Aliassime and Kyrgios put on a show for a crowd that was relieved the weather held after two frustrating rainy days in London, the teenager having ousted Grigor Dimitrov 6-4 6-4 in the opening round.

Nothing to see here, just a tweener volley winner from @NickKyrgios

Nicolas Mahut upset Stan Wawrinka 3-6 7-5 7-6 (7-2) and the qualifier's reward will be an all-French encounter with Kevin Anderson's conqueror Gilles Simon, while Milos Raonic ousted Aljaz Bedene to set up a showdown with Feliciano Lopez.

Lopez should not be short of support after linking up with Andy Murray to claim a doubles win over top seeds Juan Sebastian Cabal and Robert Farah in the Brit's latest return from hip surgery.