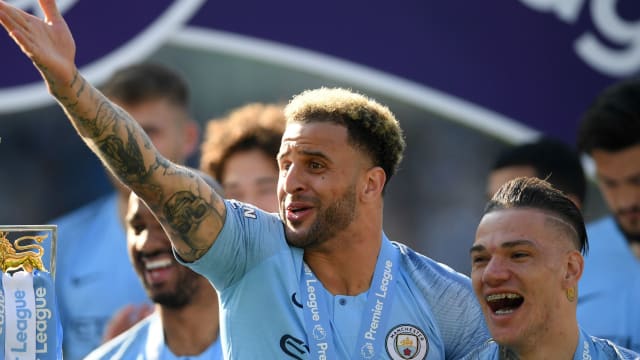 The Catalan led his club to back-to-back Premier League titles last season, before completing a clean sweep of domestic honours and he is keen to keep a core of proven winners together.

An ongoing FIFA investigation into City that could result in a transfer ban means this approach could be prudent, although it is a policy that predates football's authorities taking an active interest in the club's affairs.

A £50million signing from Tottenham in 2017, England defender Walker is in it for the long haul at the Etihad Stadium – and he is far from the only one.

Another  years of this guy  pic.twitter.com/duIGTUNDWf

Significantly older than the other players on this list, underlining the esteem in which Guardiola holds the full-back. Walker overcame a mid-season form slump with flying colours in 2019 and brought up 100 City appearances as Watford were swatted aside in the FA Cup final. Danilo is reportedly seeking pastures new due to Walker locking down the right-back slot, with Juventus' Joao Cancelo a rumoured target to bring fresh competition.

A £43.5million signing from Monaco in May 2017, Silva truly came to the fore last season. The Portugal playmaker's superb form and versatility meant Kevin De Bruyne's injury woes did not hinder City to any major extent. Like Walker, his initial deal ran until 2022. A Guardiola favourite.

A sharp, fearless shot-stopper, Ederson's composure and skill on the ball felt like the final piece in the jigsaw for Guardiola, enabling City to fully take on their manager's style. Despite agreeing a six-year contract after joining from Benfica for £35m in June 2017, he confirmed an additional two years at the conclusion of the 2017-18 campaign.

The French centre-back has become Guardiola's 'Mr Dependable' at the heart of defence, mixing an elegant assurance on the ball with an imposing physical side to his game. A £57m recruit after City triggered Athletic Bilbao's release clause last January, Laporte bolted two more years on to his Manchester stay this February.

Arguably the greatest success story of Guardiola's City tenure, Sterling is now an indispensable attacking asset for club and country. The former Barcelona boss had long been keen on his star winger signing fresh terms before he settled upon a three-year extension in November 2018.

... but I still need to work on that shooting pose tho    #TRazstrikesagain pic.twitter.com/cbOC87gSGf

Forced to be a peripheral figure for much of the treble assault, De Bruyne was named City's Player of the Season in 2017-18. The Belgium midfielder's stellar form towards the back end of 2017 apparently had Europe's super clubs licking their lips, meaning his renewed commitment in January 2018 was a source of joy and relief for supporters.

Brazil forward Jesus has perhaps not kicked on as expected from his emphatic introduction to life in Manchester in 2017, when he threatened to unseat Sergio Aguero as City's premier striker. Aguero's status is once again undisputed, but a new contract signed last November showed Jesus remains an important part of City's future.

The jewel of City's much-vaunted academy system, Foden finished last season with seven goals in all competitions - including a vital headed winner on his second Premier League start against Tottenham in April. A mesmeric solo goal for England Under-21s against France on Tuesday underlined Foden's enticing potential.