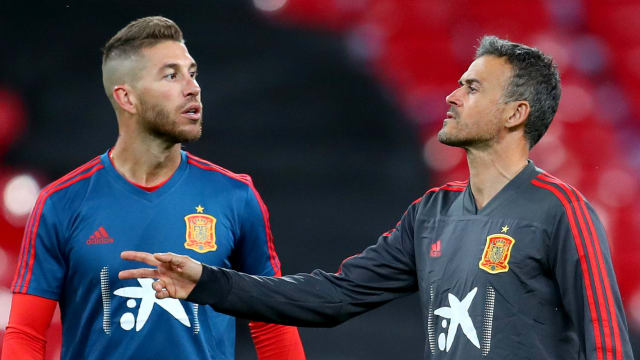 Sergio Ramos told Luis Enrique each Spain victory will still be his after the former Barcelona coach stepped down from his role as national team boss.

Having been absent from the Spain camp since March due to personal reasons, the Royal Spanish Football Federation (RFEF) confirmed on Wednesday that Luis Enrique has called time on his spell at the helm.

Robert Moreno had overseen the three fixtures Luis Enrique missed, and the former assistant will now remain in charge until the end of Euro 2020.

Spain captain Ramos – who had previously insisted the squad were fully behind Luis Enrique's decision to remain away from the camp – offered his full backing to his former coach.

Cada victoria de la Selección también será tuya, míster. Todo nuestro apoyo y nuestro ánimo.
Every win will be yours too. You have all our support.

"Every victory of the national team will also be yours, coach," Ramos wrote on his official Twitter account. "All our support and our encouragement."

"Sending you all of our love and respect, Luis," they wrote.

Sending you all of our love and respect, Luis pic.twitter.com/rPBxpPhxXV