Barty settles in quickly but Konta dumped out at Birmingham Classic 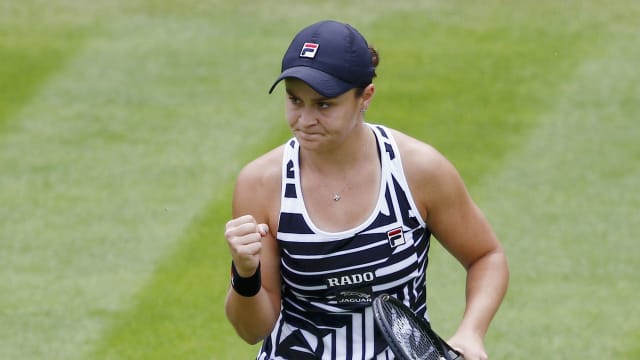 French Open champion Ashleigh Barty continued her superb form with a straight-sets win over Donna Vekic at the Birmingham Classic.

Fresh from her win at Roland Garros, second seed Barty had little trouble in adapting from clay to grass as she eased through her first-round match 6-3 6-4 on Wednesday.

Barty did have to get through a wobble early on, but soon got into her stride to dispatch Vekic – a beaten finalist at the Nottingham Open.

The 23-year-old Australian conceded four double faults through the first set, but soon recovered thanks to some unforced Vekic errors.

Barty was tested as she looked to close out the win, as Vekic came up with a series of impressive winners to break serve.

But Barty had the win firmly in her sights, and an exceptional double break set up a match point which she duly converted to earn a second-round tie with Jennifer Brady, who won her contest with Lesia Tsurenko 6-3 6-3.

She's into the second round! @ashbar96 moves past Vekic 6-3, 6-4. #NatureValleyClassicpic.twitter.com/3fk6NMTyjV

British number one Johanna Konta, however, did not fare as well – the seventh seed dumped out by Jelena Ostapenko 6-3 6-4 in their second-round clash.

Konta reached the semi-finals in Paris, but 2017 French Open winner Ostapenko was too sharp on the grass court midweek.

Petra Martic will be Ostapenko's opponent in the last eight, where they are joined by Kristyna Pliskova, who beat her twin sister and third seed Karolina 6-2 3-6 7-6 (9-7).

"I hope we can go to dinner."@KrisPliskova hopes her sister is up for a meal in Birmingham #NatureValleyClassicpic.twitter.com/4JwfS7jQ5O

Meanwhile, former world number one Venus Williams enjoyed a winning Birmingham debut as she knocked out Aliaksandra Sasnovich 6-3 6-4 to reach the second round, where she will take on sixth seed Wang Qiang.