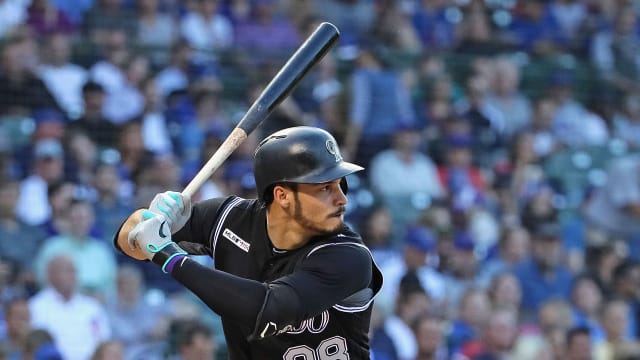 Nolan Arenado lifted the Colorado Rockies to a win over the Arizona Diamondbacks in MLB on Tuesday.

The Rockies and Diamondbacks opened a three-game series in Arizona tied for second place in the National League (NL) West, both a game or so out of the second wildcard spot.

The Rockies star opened the scoring with a two-run home run in the first and added an RBI double in the sixth to power the Rockies to an 8-1 victory.

Right-hander Antonio Senzatela allowed one run in 6.2 innings to earn the win.

A good win for the Rockies, and yet more proof why Arenado is leading the All-Star balloting among NL third basemen.

At home. On the road. Doesn't matter.

In his second MLB start, Miami Marlins right-hander Jordan Yamamoto pitched seven scoreless innings against the St Louis Cardinals, allowing only two hits and striking out seven. It was a carbon copy of his MLB debut on June 12, when he worked seven scoreless against the Cardinals and gave up three hits. According to MLB.com, that makes him the first pitcher since at least 1908 to begin his career with consecutive outings of seven-plus scoreless innings and three or fewer hits.

New York Mets first baseman Pete Alonso had four hits, including a home run and two doubles, and drove in three runs in a 10-2 win over the Atlanta Braves.

Athletics center fielder Ramon Laureano had four hits in five at-bats, including a home run, with three RBIs in Oakland's 16-2 win over the Baltimore Orioles.

Braves right hander Julio Teheran gave up six earned runs in four innings in a loss to the Mets.

The Cleveland Indians turned up the power in the seventh inning against the Texas Rangers with three consecutive home runs by Jake Bauers, Roberto Perez and Tyler Naquin.

Edwin Encarnacion cranked his first home run as a member of the New York Yankees.

We have an #Edwing sighting in the Bronx. pic.twitter.com/ggnzM3lkbr

The first two games of this series were rained out on Monday and Tuesday, spoiling Bryce Harper's second visit to Washington since signing a mega-deal with the Phillies in the offseason.