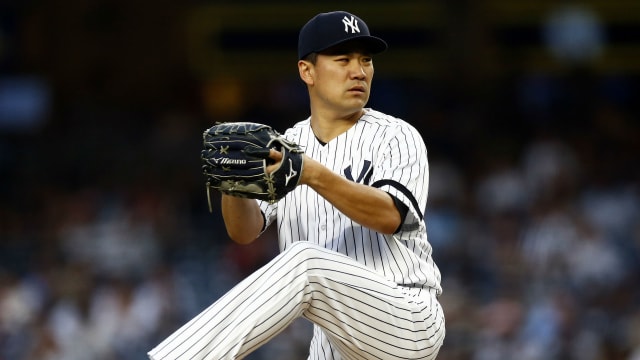 Masahiro Tanaka went the distance as the New York Yankees beat the Tampa Bay Rays in MLB on Monday.

The starter pitched nine scoreless innings and struck out 10 in the Yankees' 3-0 victory over the Rays.

He walked one and allowed just two hits while throwing 111 pitches.

DJ LeMahieu and Cameron Maybin both hit home runs for the Yankees while Tampa Bay struggled to put the ball in play.

The Rays and Yankees are within 1.5 games of one another in the American League (AL) East standings. Tampa Bay sit in second with a 43-29 record while New York are first at 44-27.

The two teams will face off again on Tuesday.

Matt Carpenter went three for four and hit a home run in the St Louis Cardinals' 5-0 win over the Miami Marlins.

Brock Holt went 0 for four in the Boston Red Sox's 2-0 victory over the Minnesota Twins.

Ozzie Albies sent one deep for the Atlanta Braves.

Dozen for the @Braves. pic.twitter.com/vLonZVe5S0

The game between Philadelphia and Washington was postponed on Monday. So, the four-game series will begin on Tuesday at Nationals Park.