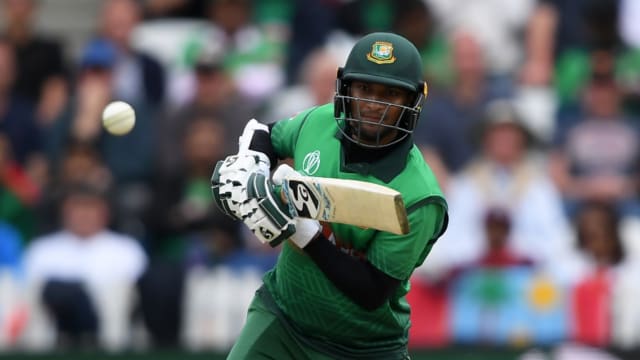 Shakib made an unbeaten 124 - his second century in a row - as Bangladesh completed their highest ODI run chase and ran out resounding seven-wicket winners in Taunton.

Liton Das (94 not out) and Tamim Iqbal (48) also weighed in, but Mortaza acknowledged Shakib, who became the tournament's highest-scoring player on Monday, has been the Tigers' star of the Cricket World Cup so far.

Bangladesh are up to fifth in the standings with five points from as many matches and more performances like Shakib's could boost their chances of making the semi-finals.

"He has made it at this World Cup and delivered for the team," Mortaza said in the post-match presentation. "Every match he has come and brought something really exceptional.

"Hopefully he'll keep going and others will join him. In the last two matches, Mushy [Mushfiqur Rahim] has batted so well; today, Tamim and Soumya [Sarkar (29)] started batting so well."

For Shakib, another strong batting display was just reward for his own hard work and a call to move up to number three.

"It feels great - obviously to stay at the wicket until the end was the most satisfying thing," Shakib said. "I've been working on my batting for the past month and a half and it's been paying off.

Shakib Al Hasan (124*) and Liton Das (94*) were the star men for Bangladesh as the Tigers went to their second victory of the tournament.#RiseOfTheTigers#WIvBAN | #CWC19pic.twitter.com/NdHvzGvnAZ

Asked about the prospect of another ton against Australia on Thursday, he replied: "I hope so. It'll be tough, especially playing against Australia, who are picking up their form. We have to bring our A-game."

The Windies were particularly disappointing with the ball but beaten skipper Jason Holder felt the problems started with a total of 321-8.

"We just didn't get enough runs," Holder said. "But having said that, I still think we could have been a lot more disciplined with the ball and we let ourselves down in the field as well.

"It was just a situation where we never got the momentum we probably should in the middle overs. We had too much to do at the back end.

"If you score 320 here, you've got to fight really hard in the field to defend it. We didn't get wickets and we let one or two chances slip."