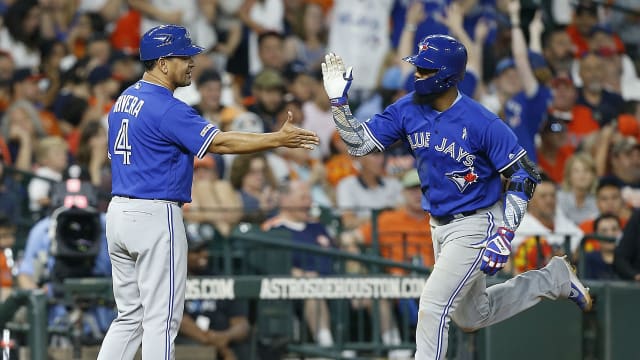 The Blue Jays also got a solid performance on the mound from Trent Thornton, who recorded seven strikeouts in 6.2 innings of work.

The rookie pitcher was drafted by the Astros in 2015 and was traded to Toronto in November 2018.

Josh Reddick was the only Houston player to get more than one hit against the Blue Jays in the loss.

Toronto sit in fourth in the American League (AL) East while the Astros are first in the AL West.

Matt Adams went two for five with two home runs and seven RBIs in the Washington Nationals' overwhelming 15-5 victory against the Arizona Diamondbacks.

Trevor Bauer pitched nine innings and struck out eight in the Cleveland Indians' 8-0 shutout of the Detroit Tigers.

The San Diego Padres and Colorado Rockies combined for an MLB record 92 runs in their four-game series.

Rougned Odor went 0 for four with three strikeouts in the Texas Rangers' 11-3 loss to the Cincinnati Reds.

Reliever Cole Irvin gave up six earned runs in 3.2 innings as the Philadelphia Phillies fell to the Atlanta Braves 15-1.

Atlanta are on a roll and have won nine of their past 10 games. They lead the National League (NL) East. The Mets are division rivals looking to gain some momentum and make up ground in the standings on the road.