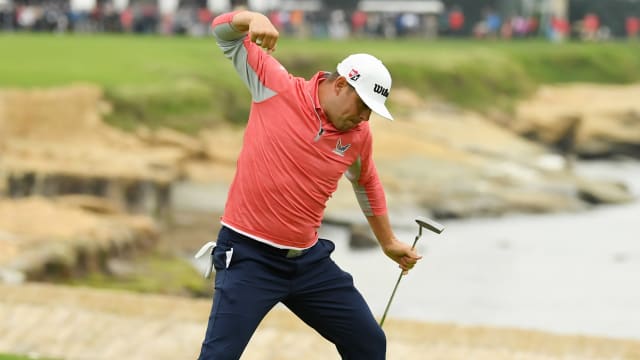 Woodland carded a two-under-par 69 for a three-stroke victory to deny Koepka a hat-trick of U.S. Open trophies following a thrilling finale at Pebble Beach on Sunday.

World number one Koepka was looking to become the first man since Willie Anderson in the early 1900s to win the tournament three years in a row.

And Koepka was a man on a mission in the final round, with the US PGA Championship holder birdieing four of his opening five holes in California.

BANG. @GaryWoodland walks off a winner!

What a way to finish the U.S. Open.#LiveUnderParpic.twitter.com/KSV6MGxFAz

Koepka closed within one shot of fellow American Woodland, who teed off with a one-stroke advantage over Justin Rose at the start of the day.

However, Koepka came up short after bogeying the 12th and shooting six successive pars to close out the tournament with a three-under-par 68 – his fourth consecutive round in the 60s.

Woodland also bogeyed the 12th but the four-time PGA Tour champion recovered by birdieing the 14th and he sealed a memorable day with a stunning birdie at the last, his fourth of the round to close the event 13 under overall.

World number four and 2013 champion Rose had to settle for a share of third position, alongside Xander Schauffele (67), Jon Rahm (68) and Chez Reavie (71).

After Saturday's 68, Englishman Rose struggled to a three-over-par 74 to finish six shots off the pace.

Meanwhile, Schauffele – the 2017 PGA Tour Rookie of the Year – secured his third top-three performance in his past five major appearances, with former world number one Adam Scott (68) a shot further back.

Four-time major champion Rory McIlroy posted a final-round 72 to be tied for ninth with Henrik Stenson (70) and Chesson Hadley (71), while Viktor Hovland was four under after surpassing Jack Nicklaus for the lowest 72-hole score by an amateur at the U.S. Open.

Masters champion and 15-time major winner Tiger Woods closed out his campaign with a 69 to be two under alongside the likes of Jason Day (69) and Paul Casey (67).