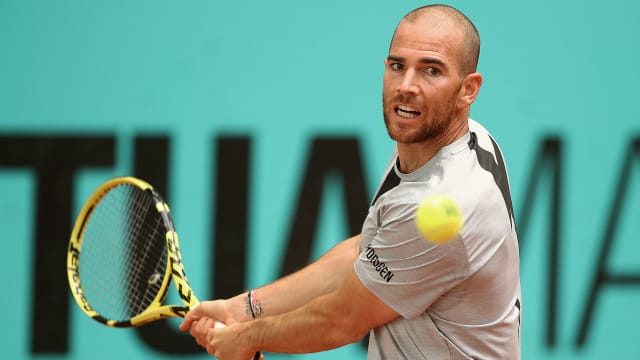 Adrian Mannarino finally won the first ATP title of his 15-year professional career as he defeated Jordan Thompson in the final of the Rosmalen Grass Court Championships.

Both Mannarino and Thompson were forced to complete their semi-finals on Sunday before contesting the final. Thompson required just three points points to round off victory over Richard Gasquet while Mannarino won a third-set tie-break with Borna Coric.

It was Mannarino who ultimately proved to have more left in the tank in the final, prevailing 7-6 (9-7) 6-3 to end his drought in his seventh Tour level final.

Thompson had lost their previous two meetings on grass, and the Australian's frustration at falling a set down in their third was obvious when he fired a ball into the stands after a pinpoint backhand down the line from Mannarino.

Mannarino survived a pair of break points at 1-1 in the second and broke for the second time in the match in the subsequent game to take a 3-1 lead.

His command was never threatened and the Frenchman served out to love, sinking to his knees in delight after Thompson fired long.

Mannarino said after receiving his first ATP trophy at the presentation: "I'd like to thank all the people who helped to make it come true, all the sacrifice of my parents and my family who sacrificed to help me become a good tennis player."

What a moment for @AdrianMannarino!