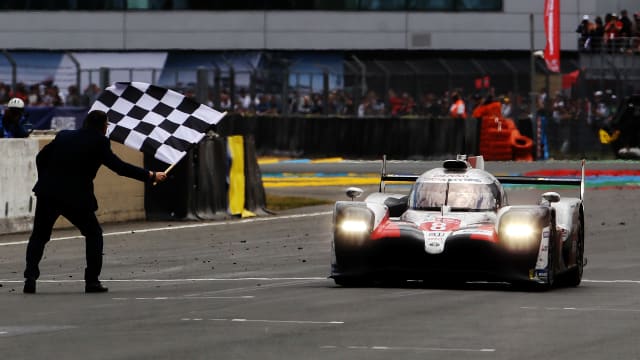 Fernando Alonso helped Toyota triumph for a second straight year at the Le Mans 24 Hours as the Formula One great chalked up another major success.

This was arguably not the priority for Alonso in 2019, but with the 37-year-old Spaniard's Indy 500 hopes left in tatters last month when his McLaren car failed to qualify, his pursuit of a rare motorsport Triple Crown had to go on the backburner.

At Le Mans he teamed up with Japanese driver Kazuki Nakajima and Swiss Sebastien Buemi, reuniting the line-up that won the French race last year, and they repeated the feat.

Their Toyota Gazoo Racing number eight car looked set to be pipped by the same marque's number seven drivers - only for Mike Conway, Kamui Kobayashi and Jose-Maria Lopez to see their first-place hopes cruelly punctured in the closing stages.

As tyre pressure decreased, Lopez was forced to drive to the pits for a replacement, and the brief stop meant the lead changed hands decisively.

That’s a back to back win for Toyota! Le Mans has chosen the Japanese brand again this year. Congratulations to @Sebastien_buemi, @alo_oficial and @kazuki_info on making history at La Sarthe Circuit!#WEC#LEMANS24#SuperFinale@Toyota_Hybridpic.twitter.com/sZKXTpPctc

Toyota's win makes them the first Japanese manufacturer to triumph twice in the elite GTE class at Le Mans.