Lampard and the contenders to replace Sarri at Chelsea 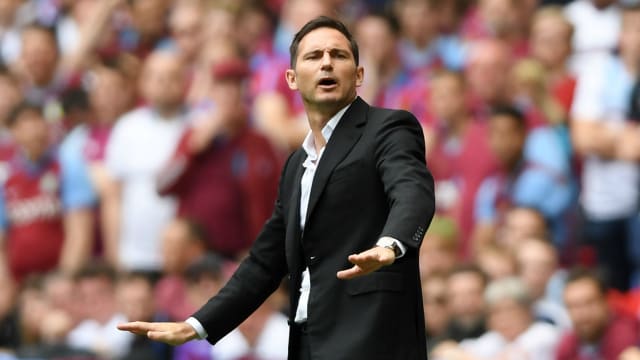 Chelsea are set to step up their search for a new head coach following confirmation of Maurizio Sarri's departure for Juventus just a single season into his three-year deal at Stamford Bridge.

Frank Lampard is the favourite to take over and the likes of Rio Ferdinand and Roberto Di Matteo have lined up in support of the Blues great.

The former England midfielder would be a popular figure on the touchline and has seemingly had the role on his radar since concluding his playing spell with the club in 2014.

But with just 12 months of managerial experience at Championship side Derby County on his resume, the appointment of Lampard to a first top-flight job - and one that carries a firm demand for silverware - would represent a considerable gamble for Chelsea and Lampard alike.

Who else, then, could Roman Abramovich pursue?

Thank you and good luck for the future, Maurizio.  pic.twitter.com/dGHzekBNPT

The Portuguese is very much a coach on the rise. Wolves charged out of the Championship in Nuno's first season at the helm and finished a highly respectable seventh in the Premier League, while the two other promoted teams, Fulham and Cardiff City, succumbed to immediate relegation. Sceptics will question whether the resources afforded by Jorge Mendes' association with the club have led to an overestimation of Nuno's talents, but victories against Arsenal, Manchester United, Tottenham and Chelsea marked him out as a manager of serious pedigree. Nuno is in a comfortable position at Wolves and it would be difficult to convince Mendes to let his client leave a project that is still in its infancy.

Like Nuno, Gracia has won plaudits for his work in a short space of time at a mid-table Premier League team. The former Malaga boss guided Watford to 50 points – nine more than they managed the previous campaign – and a trip to the FA Cup final in an encouraging 2018-19 season. His quiet demeanour has just as effectively instituted a sense of a calm and continuity at a club that has operated a revolving door for coaches in recent times, an environment analogous to Chelsea's. Managerial spells in Greece, Russia and his native Spain are sure to have honed the 49-year-old's capacity to oversee a cosmopolitan dressing room.

#ImagineIf Javi could add his name alongside these legends  pic.twitter.com/rTQ7ay9Ga9

Chelsea wanted entertaining football from Sarri. This could be the man to deliver it. Ajax were a joy to watch during their thrilling run to the Champions League semi-finals, Ten Hag successfully moulding a youthful, talented team that passed the ball with aplomb and showed no fear in knocking out Real Madrid and Juventus. Formerly in charge of Bayern Munich's reserves, Ten Hag arrived at Ajax via a successful period at Eredivisie rivals Utrecht and can take at least a portion of the credit for the development of Matthijs de Ligt, Frenkie de Jong and Donny van de Beek, among others. Appointing a coach with a knack for fostering emerging talents could be a shrewd move for a club that may have to look to its academy as the solution to a transfer embargo.

Reports in recent days describe Rangnick as a newcomer to Chelsea's shortlist of coaching contenders. It would take an abrupt change in direction for the German to land in London: Rangnick has already agreed to become the head of sport and soccer development for Red Bull when his contract with RB Leipzig expires at the end of June. Premier League links are not new, however, with Everton said to have weighed up his credentials following the dismissal of Ronald Koeman in 2017. Ragnick, in his role as sporting director, is considered the brains behind Leipzig's maturation into a high-achieving Bundesliga outfit and has had two separate spells as their head coach, most recently warming the seat for Julian Nagelsmann during the 2018-19 season. Strong results with Schalke and Hoffenheim helped establish him as one of the game's foremost minds in Germany.

Ralf #Rangnick: "The idea of developing other clubs has greatly appealed to me for a long time. I'm convinced that it now makes sense to take this role, one which I'm really, really looking forward to."

The most qualified man on the shortlist appears the least likely to take on the job. That seems to be the message after Sarri's predecessor at Juve decided he would like to take a 12-month break from coaching. Allegri, who won five Serie A titles in Turin, was linked with Barcelona in the aftermath of his exit from Allianz Stadium and will continue to be mentioned in connection with big roles until his future is resolved. Chelsea's next manager will hope Allegri's availability does not become a distraction.