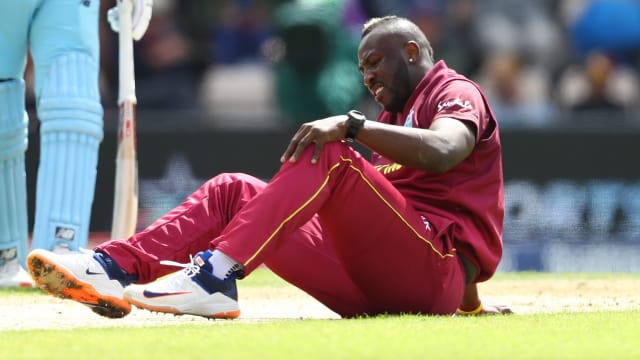 West Indies are confident Andre Russell will be fit to face Bangladesh at Taunton on Monday in what could prove a pivotal World Cup match.

The all-rounder was forced off the field in Friday's match against England because of a knee problem, and could only bowl two overs.

A fit Russell is a major asset to West Indies and captain Jason Holder said the Jamaican was "progressing quite nicely", with a final decision on his availability to be left until the morning of the match.

Holder allayed concerns over Evin Lewis, who took a blow to the body in the nets, saying the opener had only "a little bruise" and should be fit to play. Lewis has scored just three runs in two innings so the Windies will be relying on him to improve on that, if selected.

Bangladesh have won seven of their last nine ODIs against the Windies, including the last four matches, and Holder said his team would look to counter that recent history.

"If you want to put us in the underdog category, fair enough," Holder said on Sunday. "We've played them quite a bit in the recent past and they've gotten the better of us in recent past. [This is a] different stage, lots at stake for this game. We're all up for it."

Highest individual score in an innings in ODIs against @windiescricket. #BCB#RiseOfTheTigers#KhelbeTigerJitbeTigerpic.twitter.com/BrQUXyv04y

Bangladesh are hopeful Mushfiqur Rahim will be able to take part after X-ray and MRI scans gave him the all-clear following a nets scare.

The wicketkeeper-batsman was hit on the hand by a delivery from team-mate Mustafizur Rahman but was "totally fine" on Sunday, according to captain Mashrafe Mortaza.

Bangladesh and West Indies have both won once, lost twice and had a match rained off at the World Cup, leaving five matches to play.

Both are seeking to rediscover early momentum, knowing further defeats at this stage will put their semi-final hopes in serious doubt.

Bangladesh have shown flashes of their potential, beginning with victory over South Africa before losing a tight match to New Zealand. Their bowlers could not cope with England's brutal batting in Cardiff, however, and that is sure to have alerted the likes of Chris Gayle.

West Indies also started strongly by rolling over Pakistan at Trent Bridge. They fell just short against Australia at the same ground but were crushed by eight wickets against England at Southampton, an outcome that shattered some of the optimistic illusions around their pace attack.

Happy #FathersDay to all the Super Dads out there!  #CWC19#MenInMaroon#ItsOurGamepic.twitter.com/UJRUIN9dK6

Bangladesh captain Mashrafe Mortaza: "We still have five matches left. So you never know. You don't have to think [about] all those five matches. Tomorrow's match is very important. We have to take one by one. It's been ups and downs. But still a lot of matches left. We can make the difference. And we have to believe in it, which I believe that my team is believing."

West Indies captain Jason Holder: "I don't want to sit here and try to perceive what they would come with, but we're open to anything. Traditionally they rely heavily on their spinners. We don't expect them to move too far away from it. It's a smallish ground. I saw the wicket today as well. There's quite a bit of grass on it. We'll see how it plays. But we know what we're expecting in a sense from Bangladesh. And I can't see them being much different from that."

- Bangladesh have lost their last two completed World Cup matches and have not lost three in a row in the same World Cup since the 2007 tournament. The last defeat in that run came against West Indies.

- West Indies all-rounder Andre Russell has an ODI batting strike rate of 130.6, the best of any batsman from any country to score 500 or more runs in the format.

- West Indies batsman Shimron Hetmyer needs 34 runs to reach 1,000 in ODIs. He averages 40.3 with the bat so far in his career.

- Bangladesh paceman Mustafizur Rahman is set to play his 50th ODI. He already has 87 wickets to his name at an average of 23.4 - the best average of anyone to take more than five wickets for Bangladesh.