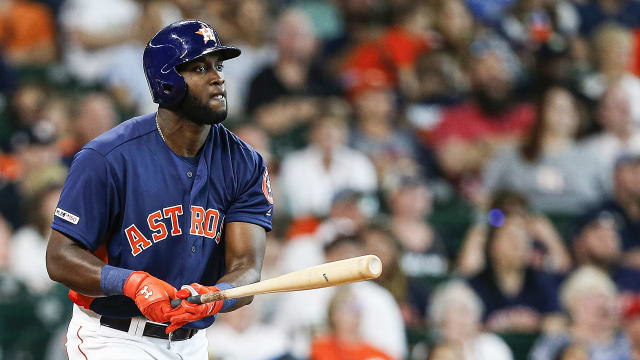 Alvarez, a 21-year-old left fielder/designated hitter, went three for four with his fourth home run of the season in a 7-2 victory over the Blue Jays.

He has played just five games but has instantly become Houston's most feared batter as he is hitting .471 with eight hits and six walks in 17 at-bats.

His latest homer got out in about two seconds while flying into the second deck at Minute Maid Park and going an estimated 439 feet.

Alvarez is just the fourth batter since at least 1908 to hit four home runs in his first five career games, according to ESPN Stats and Info. Only Colorado Rockies shortstop Trevor Story has hit more home runs in that span (six).

Houston are without three of their best position players right now as George Springer (hamstring), Jose Altuve (knee) and Carlos Correa (rib) are all on the injured list. But since Alvarez came up five games ago, their absences have not much mattered.

The Astros are 4-1 in those games while scoring 39 runs. Alvarez has accounted for 16 of those with either RBIs or runs scored.

Arizona Diamondbacks shortstop Nick Ahmed finished a home run short of the cycle, going four for five with an RBI and two runs scored in Arizona's 10-3 win over the Washington Nationals.

New York Mets left fielder J.D. Davis went four for five and finished a triple shy of the cycle in an 8-7 win over the St Louis Cardinals.

Neither the Seattle Mariners' opener nor their follower worked on Saturday. Gerson Bautista gave up three earned runs in 0.2 of an inning while Wade LeBlanc allowed six in 2.2 innings in an 11-2 loss to the Oakland Athletics.

Cleveland Indians outfielder Leonys Martin pulled off the rare straight steal of home in a 4-2 win over the Detroit Tigers.

It is a nice little battle of lefties as Ryu Hyun-jin (9-1, 1.36 ERA) takes on Jose Quintana (4-6, 3.89) at Dodger Stadium. It will be a tough ask for the Cubs to win this game though as – apart from a six-game losing streak in May – Los Angeles have lost back-to-back games just three times this year. They have done it once at home, including the losing streak.