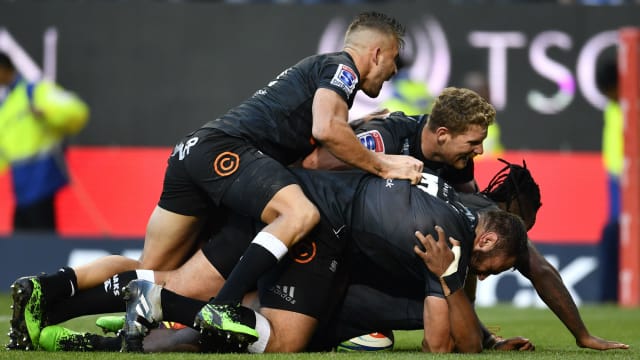 The Sharks secured their place in the Super Rugby play-offs with a last-gasp turnaround in Saturday's 12-9 win away to the Stormers, who missed out on a top-eight finish in heartbreaking fashion.

Rhyno Smith's 28th-minute try ensured the Sharks went into the break 5-3 up, as he pounced on a loose ball in the defensive half and darted clear of the entire Stormers team in an otherwise cagey opening period.

For the most part, the second half was even tighter, as penalties from Josh Stander and Jean-Luc du Plessis looked set to take the hosts through.

But incredible drama followed in the dying seconds, as Lukhanyo Am broke the line when cutting in from the left in the 82nd minute, leaving two in his tracks before crossing when the Sharks' season was hanging by a thread.

Robert du Preez rounded things off with the conversion, as the Sharks head into the play-offs at the expense of their hosts.

An outstanding fight back by the @CellC Sharks sees them pip the @THESTORMERS just before the final whistle. An immense effort by #OurSharks in the dying minutes of the game!#STOvSHA#WakandaForever#OurSharksForeverpic.twitter.com/lpc1hP6om3

The Sharks will be joined in the play-offs by the Bulls, who ran out 48-27 winners over the Lions, who needed to win to get themselves into the qualification spots.

A thrilling first half saw the two sides trade numerous blows, as the Lions started on top with a try inside the opening minute, but the Bulls were ultimately stronger, going into the break 31-19 up.

The hosts ran in three more tries in the second half, one of which was claimed by Handre Pollard, who finished with 18 points as the Lions missed out on a spot in the play-offs for the first time since 2015.