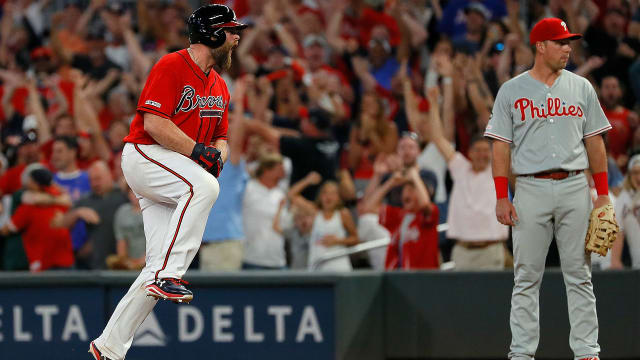 The in-form Atlanta Braves overcame a five-run deficit to upstage the Philadelphia Phillies for a 9-8 walk-off win in MLB on Friday.

Philadelphia led 7-2 heading into the bottom of the seventh inning, but Atlanta rallied to stun the Phillies for their eighth consecutive victory.

Braves catcher Brian McCann, who started the rally with a solo homer to lead off the seventh, walked it off for Atlanta with a two-out, two-run single into the gap off Phillies closer Hector Neris.

"I am overcome with emotions right now. This means everything to me," McCann told Fox Sports moments after the game-winning hit.

Having spent all but 10 days in first place in the National League East this season, Philadelphia watched as Atlanta took over the top spot on Wednesday. This appeared to be the Phillies' game early, thanks to home runs by Bryce Harper, Rhys Hoskins and Scott Kingery.

In a season where half the MLB division races are shaping up as laughers, this rivalry could be fun down the stretch. The two teams face each other 15 more times in 2019.

San Diego Padres outfielder Hunter Renfroe hit three home runs, including a two-run shot in the 12th inning, to key his team's rally in a wild 16-12 win over the Colorado Rockies. He finished with four hits and runs and five RBIs in seven at-bats.

Jake Bauers hit for the cycle and drove in four runs as the Cleveland Indians were 13-4 winners against the Detroit Tigers.

Boston Red Sox slugger J.D. Martinez had a pair of homers and three RBIs in a 13-2 victory over the Baltimore Orioles.

Robinson Chirinos hit a grand slam and had six RBIs as the Houston Astros cruised past the Toronto Blue Jays 15-2.

Astros rookie Yordan Alvarez hammers this pitch 425 feet, his third home run in four MLB games since being called up.

Onto the train tracks.

Yordan has some STUPID power. pic.twitter.com/SwB8UYRnUR

See you in another life, brotha. pic.twitter.com/vuLqYyuiNV

Rays starter Charlie Morton (8-0, 2.10 ERA) will look to remain undefeated against Mike Trout, Shohei Ohtani and the Angels. Jose Suarez (1-1, 4.35 ERA) will make his third career start for the Angels.