Three questions Warriors will have to answer after NBA Finals loss 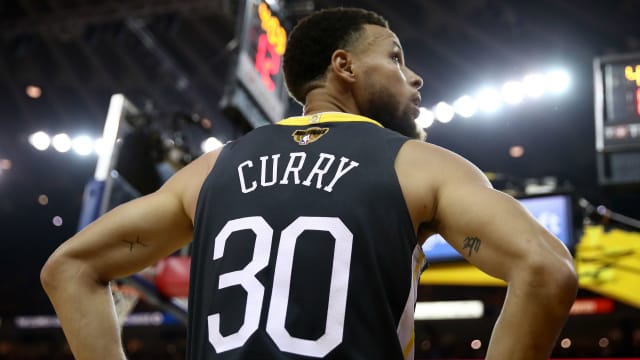 The Golden State Warriors' attempt at a NBA three-peat came up short.

Golden State's bid at history ended when they fell to the Toronto Raptors 114-110 in Game 6 of the NBA Finals on Thursday.

Kyle Lowry scored 26 points to lead the Raptors to the victory while Pascal Siakam chipped in 26.

Klay Thompson finished with 30 in the losing effort but left in the third quarter with a torn anterior cruciate ligament (ACL) in his left knee.

The Warriors now turn their attention to the offseason as their roster could look different in 2019-20.

Here are three questions Golden State will soon have to answer:

What will happen with Kevin Durant?

This is arguably the biggest question of the offseason.

All season long, Kevin Durant was expected to opt out of his contract and become a free agent. He had reportedly been considering leaving the Warriors and was linked to the New York Knicks, Los Angeles Clippers and Brooklyn Nets, among others.

But, Durant ruptured his Achilles in Game 5 against the Raptors and will be out for most, if not all, of next season.

It is unclear if the injury changes Durant's offseason plans. He could utilise his player option and return to the Warriors, although that is reportedly his last resort. Or, he could still choose to sign elsewhere — at least three teams, as well as the Warriors, are still open to giving the 30-year-old a max contract, according to ESPN.

Durant's choice will have a major impact on Golden State's future, one way or the other.

Who will play center?

The Warriors will enter the offseason with a big hole in the middle of their line-up.

DeMarcus Cousins surprisingly signed a one-year deal with Golden State last July. He was inconsistent in 2018-19 and also dealt with a torn quad during the playoffs. But he will still most likely be out of the Warriors' price range this offseason and he is expected to receive a bigger contract from another team.

Kevon Looney and Jordan Bell are both also set to become free agents.

The Warriors appear like they will attempt to re-sign either Looney or Bell, if not both. They also could look to add a big man via trade or with the mid-level exception.

Damian Jones, who has played in just 49 NBA games, has one season remaining on his contract and should be back with Golden State in 2019-20.

How will the bench be reshaped?

At the beginning of the Steve Kerr era, the bench was a strength for the Warriors. But, it became a weakness this season.

Andre Iguodala was in and out of the starting line-up and can be a contributor defensively. The wing, however, undeniably took a step back on the other end of the floor, as did long-time backup point guard Shaun Livingston.

Quinn Cook became a reliable spot-up shooter but 2018-19 was the last year of his current contract. The Warriors also did not receive much this season from 2018 first-round pick Jacob Evans.

The Warriors will have to add a few pieces to their second unit in the offseason and almost certainly will not have the cap space to do it. They will need to get creative.