Kerr in awe of injury-ravaged Warriors after Finals loss 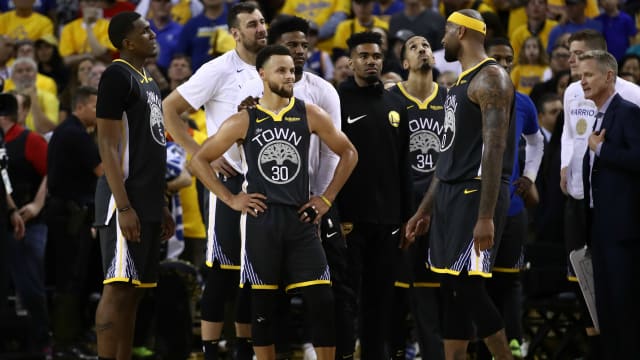 Golden State Warriors head coach Steve Kerr hailed his "incredible" team after they dealt with "devastating" injuries in their loss to the Toronto Raptors in the NBA Finals.

Two-time reigning champions the Warriors were dethroned by the Raptors on Thursday following a 114-110 defeat in Game 6 at Oracle Arena.

Already missing star Kevin Durant after he ruptured his Achilles in Game 5, Klay Thompson went down with a knee injury as the Raptors went on to seal their first NBA title thanks to a 4-2 series win.

It snapped Golden State's domination after five successive Finals but Kerr was in awe of his team post-game in the Bay Area.

The best fans in the world.

"I want to congratulate Toronto," Kerr told reporters. "They're a fantastic basketball team. Great defensively, share the ball, play a beautiful style, a lot of great two-way players and a lot of veteran players who have been in this league contributing for a long time.

"And so I'm very happy for them. Winning a championship is the ultimate in this league, and they have got a lot of guys who have earned this. Congrats to Toronto, to their organisation, to their fans, they are a worthy champion.

"Let me say a couple of words about our team. It's actually, it's hard to put into words how I feel about our team. What I've witnessed as their coach over the last five years is just an incredible combination of talent and character and commitment to each other.

"This just doesn't happen. A group of guys like this doesn't come around together and do what they did over the last five years. And I've been lucky enough to be their coach. That's what I told them in the locker room. I can't tell you my gratitude in terms of just being put in this position to be with this group and to coach them and to help them.

"But I could not be any luckier as a coach to be with these guys every day and to watch them compete and, boy, do they compete. I think they showed that throughout this series and throughout the playoffs."

This team is special. pic.twitter.com/O8fxxma9tu

Thompson poured in 30 points before he suffered a knee injury midway through the third quarter – the Warriors star later seen on crutches.

"It's amazement that we're sitting in this position with, during the game we have a chance to win the game and force a Game 7 and go back to Toronto, and you just think, how? How has this group of guys put themselves in position to do it?" Kerr continued.

"And then when Klay goes down and is out for the game, it's just sort of a, you've got to be kidding me, like this has to stop. But it's just the way it's gone. I don't know if it's related to five straight seasons of playing 100-plus games and just all the wear and tear, but it's devastating."

"What matters is Kevin Durant is going to miss next season with an Achilles tear and Klay suffered a knee injury. And we'll know more before too long. But it's just brutal. It's just brutal of what these guys have had to deal with and what they're dealing with right now."