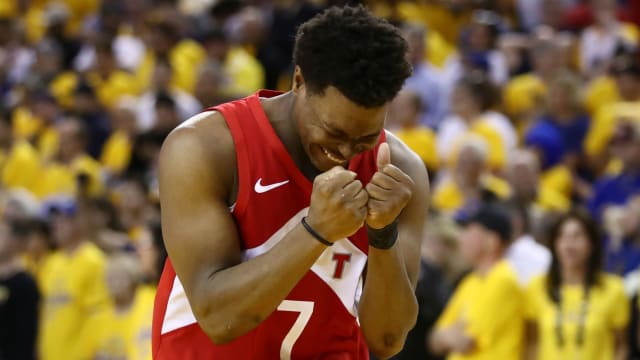 Kyle Lowry struggled to comprehend what he had achieved with the Toronto Raptors after taking the long road to an NBA title.

Point guard Lowry scored 26 points and provided 10 assists as the Raptors secured a 114-110 victory in Game 6 on Thursday to dethrone the Golden State Warriors at Oracle Arena.

The 4-2 series success secured Toronto a maiden championship in the franchise's history, while it was also a first ring for Lowry, who arrived from the Houston Rockets in a trade in 2012, in his 13-year NBA career.

"Words can't explain how I feel. It's been a long, long time," he told the media.

"To do it with the group of guys that we did it with is amazing, like it's just kind of still surreal. Kind of, it hasn't hit me yet.

"And I'm happy to be able to say I'm a champion - it's been a long time coming."

Lowry was drafted by the Memphis Grizzlies in the first round back in 2006, spending three years there and in Houston before joining the Raptors.

The 33-year-old has thrived in Toronto, making the Eastern Conference NBA All-Star roster for five successive seasons. He also won a gold medal as part of the United States' squad at the 2016 Olympics in Rio too.

Asked in his post-game press conference if he ever wondered about "keeping the battle going", he replied: "No. I always wanted to keep working, I love this game, I love this job, I love my life.

Lowry struck up a close friendship with DeMar DeRozan during their time together in Canada before the latter was dealt to the San Antonio Spurs as part of the deal to acquire Kawhi Leonard last year.

While the trade was disappointing from a personal point of view, Lowry understood the decision taken by Raptors general manager Masai Ujiri and quickly buckled down to make it work with his new team-mate.

"When he made the trade as a friend of mine, my emotions were there, but I understood that I had to go to work, and I still played for the Toronto Raptors," Lowry said.

"So I knew that that's my job, my job was to go out there and to be the best basketball player I could be."