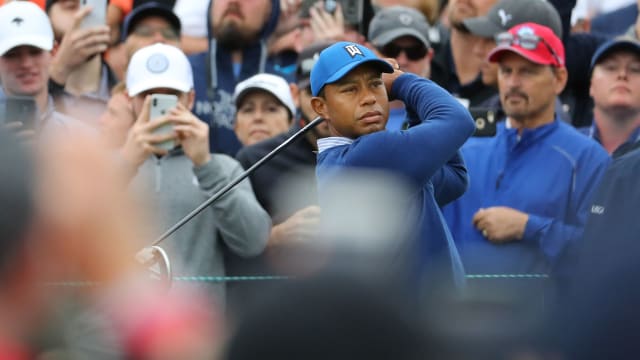 Tiger Woods was infuriated by his finish in the second round of the U.S. Open, the former world number one venting his frustration after closing the day with back-to-back bogeys.

Woods carded a one-over-par 72 to move to even par at Pebble Beach, where the 15-time major champion was seven strokes off the pace.

The Masters champion made just one birdie throughout another tough day, which was made worse by consecutive bogeys at the eighth and ninth holes.

Asked if he was steaming after dropping back-to-back holes on Friday, Woods told reporters: "Yeah, I am. Not a very good finish."

Tiger Woods made his first bogey in 30 holes.

He is even today and -1 overall. pic.twitter.com/tnf2sXTO20

Woods added: "I'm a little hot right now. I just signed my card about a minute ago. So need a little time to cool down a little bit.

"[The greens were a] little bit quicker. Still a little slow and bumpy. It's so important to be below the hole, because above the holes, they're a little tough to make.

While his round did not go according to plan, Woods remains in the hunt at the halfway stage of the U.S. Open – a tournament he has won three times but not since 2008.

"Right now I'm still in the ball game," the 43-year-old American star said. "There's so many guys with a chance to win. We've got a long way to go, and, you know, we'll see how it shapes up for tomorrow.