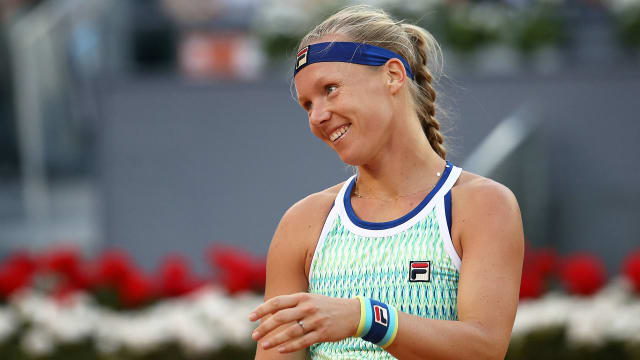 Kiki Bertens will face teenage qualifier Elena Rybakina in the semi-finals on home soil after winning twice at the Rosmalen Grass Court Championships on Friday.

Bertens finished off Arantxa Rus 7-5 6-3 before returning later in the day to see off Natalia Vikhlyantseva 6-3 6-3 in 's-Hertogenbosch.

The top seed took just 70 minutes to account for Vikhlyantseva, winning 82 per cent of points on her powerful first serve and making the Russian pay for 30 unforced errors.

World number four Bertens retired from the French Open due to illness but could give herself the perfect tonic this weekend by making a glorious start to the grass-court season.

Donna Vekic downed Kristina Mladenovic to reach the last four of the Nottingham Open in a contest that was played on grass and then indoors.

Vekic and doubles world number one Mladenovic had to complete their match inside on a hard court due to more rain and it was the second seed who prevailed 7-5 6-4.

The Croatian will face Tatjana Maria - a straight-sets victor over Ajla Tomljanovic - while top seed Caroline Garcia battled past Elena-Gabriela Ruse in three sets and will take on Jennifer Brady, a 7-5 6-3 winner against fourth seed Maria Sakkari.