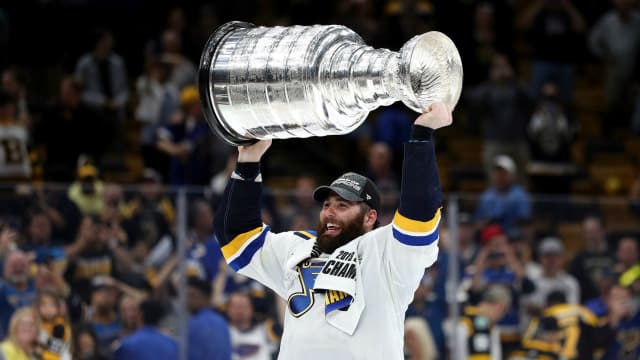 Pat Maroon summed up years of frustration for the St Louis Blues coming to an end as they finally lifted the Stanley Cup, when he said: "Holy cow. We brought it home."

Born and raised in the Missouri city, Maroon finally got the chance to play professional hockey for the team he supported as a boy when he was acquired by the Blues last July.

Maroon might have made more money elsewhere but the pull of representing his home side swayed the now 31-year-old winger, and how the move has paid off.

The Blues won the Stanley Cup Final with a 4-1 victory in Game 7 over the Boston Bruins on Wednesday, leading Maroon to say: "We've been waiting for this for so many freaking years. And to be from St Louis and put this sweater on every night… holy cow. We brought it. We brought it home."

The Blues were preparing to party into the weekend as they boarded their flight home after the game, and Maroon said, according to nhl.com: "I can't even fathom what this is going to be like these next few days with these fans.

"These fans deserve it more than anyone. We did it! We did. There's nothing else.

"We put everything on the line from January 3 on, and we deserve this. What a way to finish it off on the road where we play great, and all these people, all these media doubted us all year long."

January 3 is a pertinent date because the Blues were bottom of the NHL then, but now they are champions for the first time after a dramatic turnaround in results.

St Louis struggled under Mike Yeo's leadership in the early stages of the 2018-19 season and he was replaced by the experienced Craig Berube in November.

He said: "I just think he was a guy who played and he knew how to understand it. He understood the players, he knew how to talk to us, and we did it.

"He was unbelievable, countless hours and countless work and everything we put in during the summer, and we did it tonight."

WE DID IT SAINT LOUIS  Let’s Party!

Maroon celebrated with his son, Anthony, and said: "It's amazing. I can't even cry anymore. This is nuts.

"Being from St Louis, I can't wait to party with people back at St Louis.

"I've been behind this team for so many years. It took 49 years to get their Stanley Cup and we did it tonight."

Maroon allowed his son to kiss the trophy, and said: "It's amazing. Look at him. Who wouldn't want it like that being from St Louis, signed in St Louis, winning the Stanley Cup and bringing it home, being with my family and friends?

"I can't wait for these next few days. This is truly something I'll never forget."