Hazard happy for Sergio Ramos to stay on penalty duty 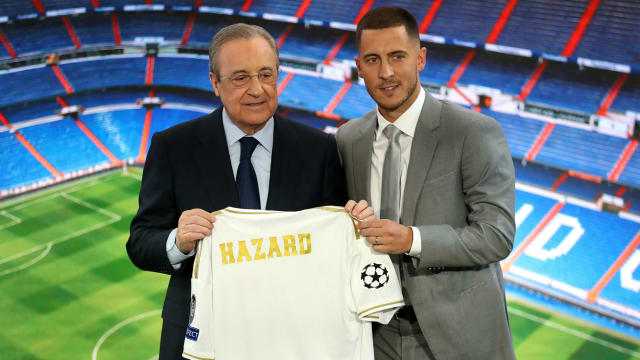 Eden Hazard is happy to let captain Sergio Ramos carry on taking penalties at Real Madrid and admitted he could not convince Luka Modric to give him his number 10 shirt.

Belgium international Hazard completed his move to Los Blancos last week after seven years at Chelsea, where he earned a reputation as one of the most reliable penalty-takers around.

However, centre-back Ramos has also proven adept from 12 yards since replacing Cristiano Ronaldo as Madrid's designated spot-kick taker and Hazard is happy for his new skipper to continue in that role.

"I think the captain takes a really good penalty," Hazard said at his unveiling on Thursday.

"I don't think he's going to ask me to take them! I think he'll keep taking penalties and he'll keep scoring no doubt."

Hazard has made a request of his own, though, as he revealed he had already attempted to acquire the number 10 shirt.

Ballon d'Or winner Modric is the owner of that jersey and Hazard revealed he had used the Croatian's international team-mate Mateo Kovacic, who was on loan at Chelsea last season from Madrid, in a bid to obtain the shirt.

However, at his presentation, Hazard only had his name on the back of a numberless shirt and he conceded his efforts to sway Modric had been futile.

"I've been in contact with Modric via Kovacic and I asked him if I could have the number 10 and he said no," Hazard added.

"[It was] a bit of a joke we had. I'll have to find a number but I don't think the number is the most important thing.

"I think the most important thing is to wear the Real Madrid shirt and defend this club."