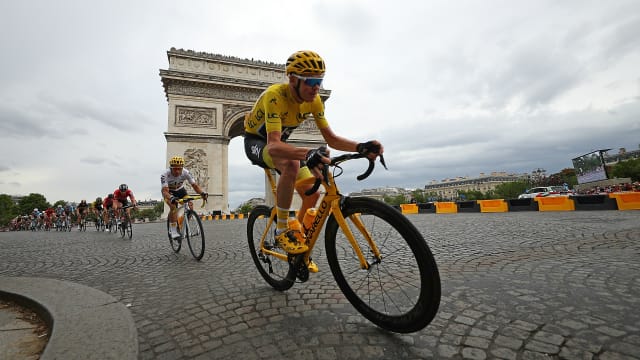 Chris Froome underwent surgery and was placed in intensive care after the horrific crash that ruled him out of the Tour de France.

The freak high-speed accident occurred as Froome blew his nose while riding in the Criterium du Dauphine on Wednesday.

Froome sustained multiple fractures towards the end of the route recon in Auvergne-Rhone-Alpes.

"He went from 54 kilometres an hour to a dead stop," Brailsford told the BBC's Bespoke Weekly podcast. "It's a big crash this one, it's not great.

Further news of 34-year-old Froome's condition was expected on Thursday.

Froome had been riding alongside team-mate Wout Poels at the time of the accident.

"He signalled to Wout that he was about to blow his nose," Brailsford said. "He took his hands off the bar to do that and it looks like a gust of wind took his front wheel and he lost control and went straight into the wall of a house."

The former British Cycling performance director added: "I'm concerned, obviously, and I think it's our responsibility to make sure he gets the best possible medical care in these situations.

"We've flown [his wife] Michelle over to him. We just have to monitor the situation.

"Time is of the essence in these situations – he's been operated on to make sure that first phase of medical care is as optimal as possible. And then we'll manage it from there."

Froome's wife used the rider's Twitter account to post an update on Wednesday evening, writing: "Chris is in surgery at the moment to repair the multiple fractures, please keep him in your thoughts. I hope to be able to share a message from him tomorrow morning – MF."

Froome had been set to challenge Team INEOS colleague and defending champion Geraint Thomas for glory in this year's Tour, which begins in Brussels on July 6.