Bertens on course for quarter-finals, Garcia through after being forced indoors 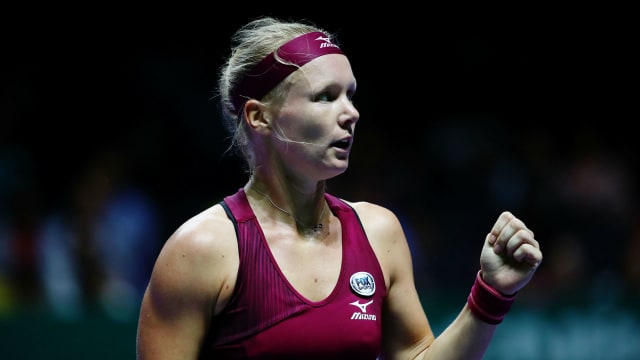 Kiki Bertens was on course for the quarter-finals of the Rosmalen Grass Court Championships when play was suspended and Caroline Garcia progressed in Nottingham after being forced indoors due to rain.

World number four Bertens led 7-5 4-3 in 's-Hertogenbosch on Thursday when inclement weather prevented her from finishing a second-round encounter with Arantxa Rus.

Wildcard Rus stormed into a 5-1 lead in the opening set, but fellow Dutchwoman Bertens dug herself out of a huge hole by winning six games in a row in their homeland.

Top seed Bertens, who withdrew from the French Open due to illness, broke straight back after failing to hold in the opening game of the second set and they were on serve when the rain returned.

Ekaterina Alexandrova and Elena Rybakina were 6-3 6-4 winners over Ysaline Bonaventure and Alison Van Uytvanck respectively, while Veronika Kudermetova got past Destanee Aiava in straight sets.

Top seed Garcia moved into the quarter-finals of the Nottingham Open with a 6-3 6-1 thrashing of British wildcard Maia Lumsden.

Matches were moved to an indoor hardcourt facility with no play possible on the grass due to poor weather, with second seed Donna Vekic hammering Chloe Paquet 6-1 6-2.