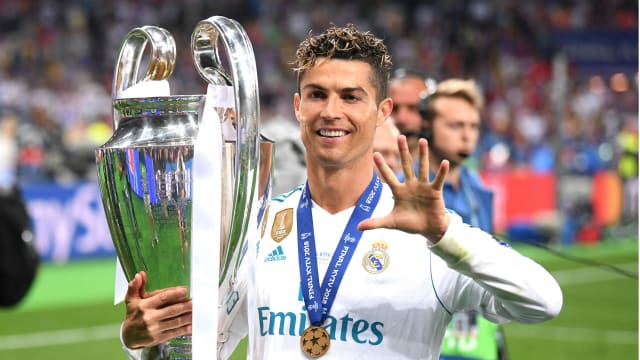 Luka Jovic used to sleep in a Real Madrid shirt and says Cristiano Ronaldo was his idol.

Jovic has signed a six-year deal with Los Blancos, who paid Eintracht Frankfurt a reported €60million.

The Serbia striker becomes part of Madrid's rebuild in Zinedine Zidane's second spell at the club.

But Jovic revealed it was Ronaldo, who left Madrid for Juventus last year, who was his idol.

"Ronaldo, definitely, as a kid," Jovic said when asked who his favourite Madrid player was.

"Right now I don't pick one player out, as we're all team-mates now.

"I know last season was not the best season at Real Madrid, but hopefully next year will be better.

"The price does not bring more pressure, I've not really thought about that. I am just focusing on what I have to do on the pitch.

"I've not had a chance to talk to any Madrid players yet. I'd like to talk to Luka Modric and hopefully I will do that in the next few days."

The moment Luka Jović stepped out on to the Bernabéu pitch for the first time as a @RealMadrid player!#WelcomeJovic | #RMTVpic.twitter.com/JcQ9SBaLy3

Jovic confirmed a story told by club president Florentino Perez at his unveiling about him sleeping in a Madrid colours growing up.

"Yes it is true, the jersey was a gift from a family friend," he added. "I was a Madrid fan, like many kids."

Of fellow new signing Hazard, who will be unveiled on Thursday, Jovic added: "He is a fantastic player, one of the best in the world and it will be a pleasure to share a dressing room with him."