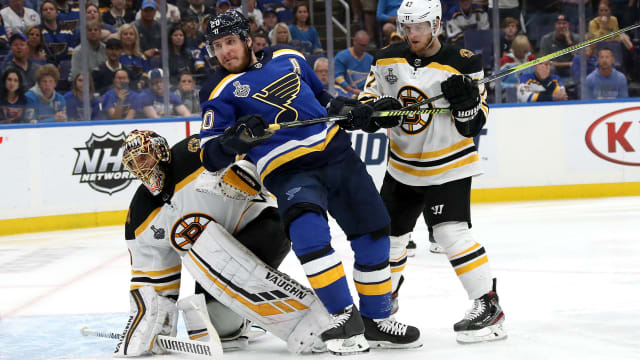 The St. Louis Blues and the Boston Bruins are going to Game 7 - and they should serve up a treat.

For the first time since 2011, the Stanley Cup Final will require a deciding game to determine who will be crowned champion, with Boston rallying to keep St. Louis from closing out the series in Game 6 on Sunday.

The Blues are still in the hunt for the team's first championship in their 51-year history, while the Bruins are seeking their seventh overall and second since 2011.

Here are three things to watch ahead of the winner-take-all showdown in Boston...

Blues center Ryan O'Reilly extended his point streak to five games on Sunday, as he scored a goal on three shots in a loss. With seven goals and 14 assists through 25 playoff games, his 21 points are tied with Brett Hull, Doug Gilmour and Bernie Federko for the most by a Blues player in one postseason.

Meanwhile, defenseman Alex Pietrangelo has 15 assists and 17 points in the playoffs, which are the most by a St. Louis player at his position. He tied Federko for the Blues' assist record in one postseason and has also added two goals during the team's run.

O'REILLY!!!!!!!! BLUES ARE ON THE BOARD!!!!! #stlblues#WeAllBleedBluepic.twitter.com/3ytznHhIdu

Chara to close out postseason for the ages

On the opposite bench, Bruins defenseman Zdeno Chara is gearing up to play his 14th Game 7, passing Patrick Roy and Scott Stevens for most in NHL history.

The 42-year-old captain, surprisingly active on Sunday despite suffering a broken jaw in Game 4 when he was struck in the face with a puck, set another record with his empty-net goal in the third period, becoming the oldest defenseman to score a goal in Stanley Cup Final history.

How important is home ice?

In the Stanley Cup Final, history shows playing in front of your own fans is a significant advantage. Home teams are 12-4 in Game 7 of the championship series, though the hosts have lost the last two such games. The Vancouver Canucks most recently fell to the Bruins in 2011, while the Detroit Red Wings were defeated by the Pittsburgh Penguins in 2009.

The Blues have won twice at TD Garden this series but know winning on the road for a third time will be no mean feat against a Bruins team hosting a title-decider for the first time in their 95-year history.