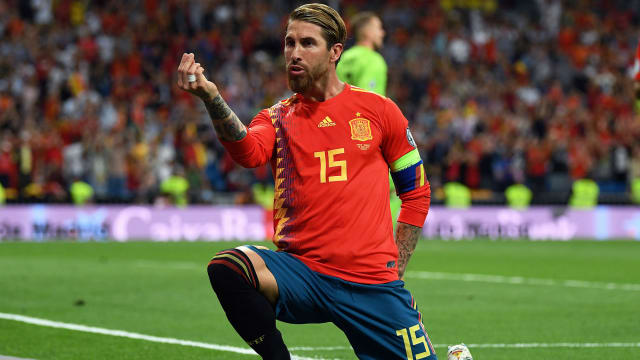 Spain made it four wins from as many games in Euro 2020 qualifying despite coach Luis Enrique's continued absence as a second-half flurry saw them beat Sweden 3-0 at the Santiago Bernabeu on Monday.

Luis Enrique has been on leave since March due to a family emergency, but Robert Moreno continues to keep the ship on course in his stead, with Serio Ramos, Alvaro Morata and Alvaro Oyarzabal scoring in the final 26 minutes to send Spain five points clear in Group F.

Sweden could count themselves extremely fortunate to remain on level terms until the break, as Robin Olsen was forced into several fine saves and Dani Parejo had a goal controversially disallowed.

But Spain eventually found a way past Olsen via Ramos' penalty, before Morata netted the game's second spot-kick and Oyarzabal wrapped up the routine win.

It did not take Spain long to establish control and they went close in the 14th minute when Fabian Ruiz's long-range strike was acrobatically tipped over by Olsen.

That was the first of four vital saves in as many minutes, as Olsen then parried a goal-bound Parejo volley wide, palmed away Ramos' header from the resulting corner and kept Isco's placed effort out.

A few moments later Spain were harshly denied the lead for an apparent offside against Parejo before he squared to Rodrigo Moreno for an easy finish.

The onslaught resumed after the break and Spain finally got the breakthrough just past the hour, as Ramos swept home from the spot after Sebastian Larsson was adjudged to have handled a Marco Asensio cross.

A straightforward win was completed soon after – Oyarzabal curling a wonderful left-footed effort out of Olsen's reach after Fabian's pass.