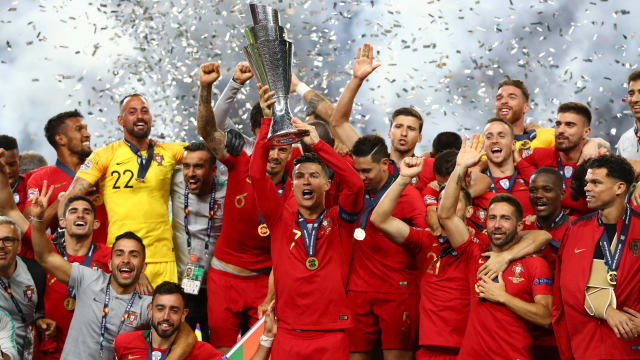 Cristiano Ronaldo has vowed to lead Portugal in a drive for more silverware after their Nations League triumph.

The Juventus forward was the leading scorer at the Nations League Finals thanks to his semi-final hat-trick against Switzerland.

He then helped his country defeat Netherlands 1-0 in Sunday's title match, when Goncalo Guedes netted the only goal.

And 34-year-old Ronaldo intends to remain available to Portugal for as long as the team continue to make progress, with the Euro 2020 trophy next in the captain's sights as they look to defend the title they won in France three years ago.

He said: "The national team will continue, with or without Cristiano. I think the team has great potential. There are young players, players who over the years will become more mature and better.

"I want to be part of this project because I feel good and I feel able to help the national team."

2 - Portugal have won two of the last four competitive international tournaments that they've appeared in, with their previous triumph coming at EURO 2016. Formula. pic.twitter.com/24UBSefw6x

Ronaldo also told uefa.com: "I think the national team has the potential to continue to evolve and win more trophies."

With 88 goals in 158 appearances for his country, he is the highest scoring European in international football history.

"A lot of happiness!" he said. "It was excellent, I'm very happy. Having won this trophy here in Portugal in front of the Portuguese people, for me this is a great honour."