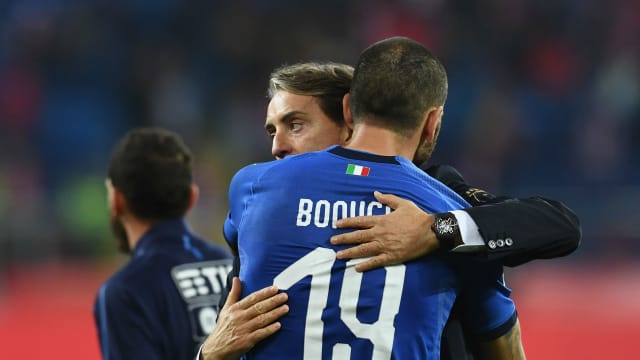 Leonardo Bonucci saluted the clarity of Roberto Mancini's philosophy and his faith in youth after overseeing an improvement since taking over Italy in May 2018.

Mancini was appointed after Gian Piero Ventura failed to guide Italy to the 2018 World Cup, falling to Sweden in a play-off the year before.

It was the first World Cup since 1958 Italy missed out on, leaving the Italian Football Federation (FIGC) certain a change was needed.

Mancini took over following Luigi Di Biasi's spell as caretaker and has not been shy about calling young players up to his squad, with Sandro Tonali, Moise Kean, Nicolo Zaniolo, Nicolo Barella and Lorenzo Pellegrini all included at least once by the former Manchester City boss and Bonucci, a regular in Italy's squad since his international debut in 2010, has credited that refreshing approach.

"What's changed, above all, is our coach," Bonucci told a news conference.

"He came in with a very precise idea, which has gone on to spread throughout Italian football.

"Many young players have managed to impose themselves, each giving their own contributions."

Under Mancini's stewardship, Italy have won all three of their Euro 2020 qualifiers so far, beating Finland, Liechtenstein and Greece, scoring 11 goals and conceding zero across those fixtures.

Despite Mancini's commitment to youth, he has stuck with the experienced duo of Bonucci and his Juventus team-mate Giorgio Chiellini for two of the qualifiers.

And - ahead of Tuesday's clash with Bosnia-Herzegovina in Group J, Bonucci acknowledged that his role in the squad is now to assist the development of Italy's less experienced players.

"What interests Chiellini and I is not conceding goals. We're able to create chances and it makes us happy when we take them," Bonucci added.

"Giorgio and I have a relationship of friendship and esteem, on and off the field, and we'll keep going until the end of both our careers.

"Our objective is to make players understand what it means to be in a team like the national team. A great group has been recreated."