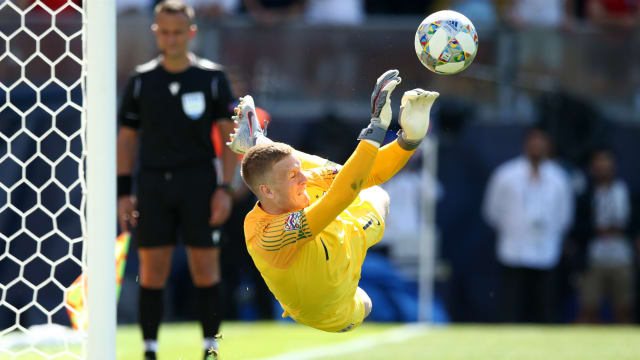 Josip Drmic saw his spot-kick saved by Jordan Pickford as England beat Switzerland 6-5 on penalties to claim third place in the Nations League after a goalless draw in Guimaraes.

In the first 90 minutes, England were twice denied by goalkeeper Yann Sommer making fingertip saves to push the ball onto the woodwork, while Callum Wilson had a late strike ruled out following a VAR check.

Sommer again came to Switzerland's rescue during the 30 additional minutes but despite a steady stream of excellent Trent Alexander-Arnold crosses England could not find the breakthrough.

Gareth Southgate's side broke their penalty malaise at last year's World Cup and, after 11 converted kicks, including one from Pickford, the Everton keeper dived to his right to keep out Drmic's poor effort and finally settle the prolonged play-off clash.

England almost opened the scoring in the second minute, but Harry Kane's clever chip bounced back off the crossbar after goalkeeper Sommer got a touch to the ball.

Kane freed Raheem Sterling for a one-on-one chance but his tame finish was blocked by Sommer, the forward then failing to convert a right-wing cross from Alexander-Arnold.

Another pinpoint Alexander-Arnold delivery created an even better opportunity for Dele Alli in the 35th minute but his header flew over the crossbar.

Alli connects with a brilliant Alexander-Arnold cross but heads it over the top... #NationsLeague pic.twitter.com/yyUf309m3F

Sommer made a great save to prevent Fabian Schar scoring an own goal after the interval, turning a deflection off the defender onto the post, then at the other end Pickford was called into action to push away Granit Xhaka's firm drive.

Substitute Wilson seemed to have won it late on for England, but the strike was disallowed after a VAR check for his foul on Manuel Akanji in the build-up.

A brilliant double save by Sommer maintained the deadlock in extra time, with the woodwork saving Switzerland again when Sterling beat the goalkeeper with a 20-yard free-kick.

Sommer could do nothing about England's penalties, though, with Pickford netting himself before making the decisive save from Drmic in the shoot-out.

What does it mean? England experiment with flexibility

Southgate used a fairly irrelevant game to try a new tactical system, which saw England alternate from a traditional back four to more of a central three, with Eric Dier dropping into defence from the base of midfield.

Switzerland's lack of goal threat is no secret - last year's 5-2 defeat of Belgium remains a curious outlier - but a solid defence should see them reach Euro 2020 relatively easily.

That Switzerland stayed in the game owed much to their goalkeeper, who twice made vital interventions to turn the ball onto the woodwork. On the back of a solid season for Borussia Monchengladbach, Sommer stood out for his composure and reactions in key moments.

England could and perhaps should have been out of sight at half-time, but Sterling failed to make the most of two clear chances. The Manchester City winger looked like a long season had caught up with him with fatigue seemingly playing a part in an under-par display, a heavy touch in the box during the second half summing up his frustrating efforts.

Both teams will enjoy a deserved rest before the 2019-20 season. In September, England's Euro 2020 qualifying campaign sees them host Bulgaria and Kosovo, while Switzerland play the Republic of Ireland and Gibraltar.