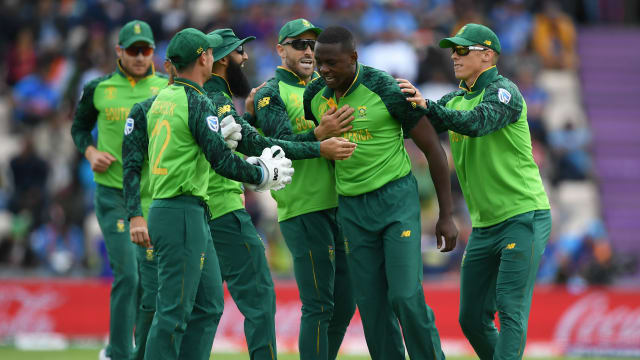 Kagiso Rabada sees little point in South Africa complaining about their injury woes as they attempt to get their Cricket World Cup campaign back on track against West Indies.

The Proteas face a potentially make-or-break clash in Hampshire after losing their opening three matches to England, Bangladesh and India.

South Africa's cause has not been helped by the fact Dale Steyn was ruled out of the tournament with a shoulder injury, while Lungi Ngidi missed the India match with a hamstring problem and remains a major doubt for the Windies contest.

In contrast to South Africa's struggles, the Windies came into the tournament fit and firing but Rabada insists the team will never feel sorry for themselves.

"I wouldn't say it's jealousy. I think that we have to deal with what we have. There's no point in complaining about it," he said.

"Unfortunately, you know, we've had quite a few problems in this tournament regarding injury.

Rabada took 2-39 in the six-wicket loss to India and, while the deck may be stacked against them, he is confident South Africa can rise to the challenge.

"We'd just lost two games on the bounce and there was a lot of emphasis on that game," he added, when told he appeared to have a fire about him against India.

"It's a game that I really hoped that we would win. There was a lot on that, on that game. It was going to give us some breathing space.

"So now we've just got a stiff challenge ahead of us, but we're ready to stand up, rise up to it."

The future of our nation wishing our #SBProteas well, reminding them we are behind them all the way. We're still in it! #ProteaFirepic.twitter.com/uwuBkpjabr

The Windies are also looking to rebound after following an opening-match hammering of Pakistan with a 15-run loss to Australia.

In both matches, West Indies' bowling attack impressed with both Pakistan dismissed for a dismal 105 and Australia failing to make 300.

Assistant coach Roddy Estwick says the team must now do better in the crucial moments.

"We bowled both teams out for under 300 runs, so we are very happy with the way the bowlers have executed [their plans].

"What we must do is play the one percenters a bit better and I'm sure if we did that in the last game, we would have won the game. It's nothing to do with the bowlers. We are all in it together.