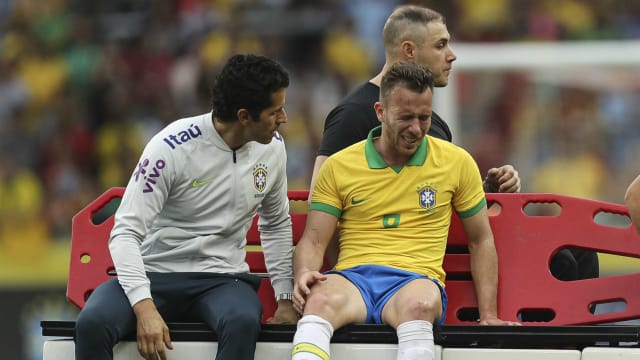 Brazil romped to a 7-0 victory over 10-man Honduras in their final friendly before hosting the Copa America, but lost Arthur to injury.

Tite's men were already 2-0 up thanks to Gabriel Jesus and Thiago Silva headers when Romell Quioto was sent off for an awful challenge on Arthur, who was substituted after receiving treatment on his right knee.

Philippe Coutinho scored a penalty, Jesus added his second and David Neres hit his first international goal after the break as Brazil warmed up for the Copa America in style.

Roberto Firmino came off the bench to extend the lead and Richarlison was also on target as the 10 men struggled to contain Brazil, who will be without Neymar for the upcoming tournament due to an ankle injury.

Jesus headed Brazil into an early lead, the Manchester City striker nodding in a right-wing Dani Alves cross at the back post with the goal surviving a lengthy VAR check.

The second goal arrived in just the 12th minute as Silva stole in front of his marker to guide a near-post header across goalkeeper Luis Lopez from a left-wing Coutinho corner.

Honduras were then reduced to 10 men when Quioto was dismissed for a horrible tackle that ended Arthur's participation in the game.

Coutinho extended Brazil's lead by converting a penalty awarded for Emilio Izaguirre's foul on Richarlison, then the Barcelona forward thudded a long-range drive against the woodwork.

Goals continued to flow after the break. Jesus helped himself to a simple second when Richarlison unselfishly nodded Fernandinho's lofted pass into his path, before Neres opened his international account with a fine solo run and finish.

Jesus was replaced by Firmino and the Liverpool forward dinked a clever chip over goalkeeper Lopez to add his name to the scoresheet in the 65th minute.

Honduras were increasingly unable to cope in defence due to Brazil's numerical advantage and the general gulf in quality, with Everton setting up Richarlison for a tap-in to complete the scoring.

What does it mean? Arthur injury could be costly

Neymar has already been ruled out of the Copa America after damaging his right ankle in a friendly against Qatar and coach Tite may perhaps be fearing Arthur could now follow.

Tuning up against sides of much lower quality may provide a confidence boost for attackers but their schedule has potentially robbed Brazil of two key players going into the tournament.

Tite must decide whether to field Firmino or Jesus in attack during the Copa America, with the Manchester City striker making his case with a brace of clinical finishes.

Firmino may have more to his all-round game, but Jesus is a prime penalty box poacher. Even without Neymar, Brazil have attacking riches most of their South American rivals cannot match.

There was no chance Quioto could beat Arthur to the ball, so what the Houston Dynamo player was thinking when he lunged into a terrible tackle is difficult to fathom.

It may well have cost the Barcelona star a chance to represent his country in a major tournament on home soil.

Copa America hosts Brazil start their campaign against Bolivia on Friday. Honduras will take on Jamaica in their Gold Cup opener on June 17.