There are no positives – Deschamps pulls no punches after France defeat 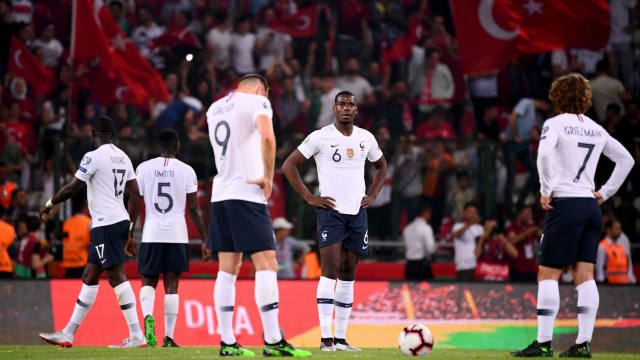 Didier Deschamps conceded France were nowhere near their best in a 2-0 Euro 2020 qualifying defeat in Turkey on Saturday.

The world champions failed to muster a shot in target in what was a miserable performance as goals from Kaan Ayhan and Cengiz Under helped Turkey to a memorable triumph.

Turkey are now three points clear of France in Group H and Deschamps said his side simply had an off night.

"When you have a performance like that, there are no positives to take," the France coach was quoted as saying by L'Equipe.

"Even if we are world champions, from there, we cannot hope for anything.

"We took a smack tonight. We can analyse.

"There is a match waiting for us in three days. Nothing to add except to congratulate Turkey and return to our basics."

Of the 11 players who started France's 2018 World Cup Final win over Croatia, nine begun the match in Turkey.

Les Bleus have a chance to bounce back quickly when they visit Andorra on Tuesday, with the hosts having won just one competiive match since 2004.