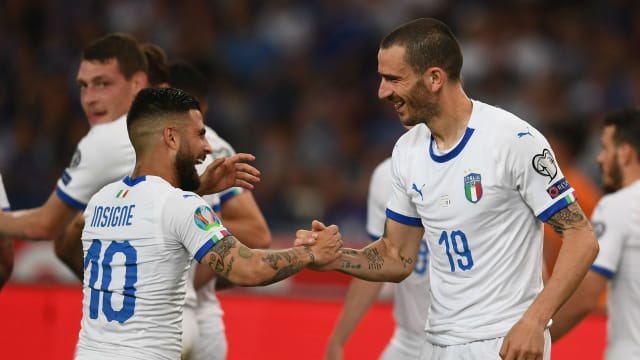 Italy made it three wins from as many Group J matches with a 3-0 victory over Greece in their pursuit of a place at Euro 2020.

Roberto Mancini's side added to wins over Finland and Liechtenstein as Nicolo Barella, Lorenzo Insigne and Leonardo Bonucci all scored inside 10 first-half minutes in Athens.

It leaves Italy – who are yet to concede in qualifying – with a maximum return of nine points, while Greece remain on four.

Andrea Belotti was thwarted by Zeca's timely intervention as he sought to get on the end of a threatening throughball inside the opening five minutes.

The Torino striker then showed poor technique in lifting a shot from the edge of the box well over the crossbar at the end of a promising move.

But the breakthrough came in the 23rd minute when Greece were overrun at the back and Belotti's cutback was slammed home by Barella.

#EuropeanQualifiers
23'
YES!!!! #BARELLA POPS UP TO OPEN THE SCORING!

Greece charged forward in an attempt to get back into the match but were caught on the counter-attack as Insigne darted past Andreas Samaris and poked a deft finish beyond goalkeeper Vasilios Barkas.

The match as a contest was over before half-time, Bonucci's header from Emerson's delivery clipping the upright on its way in.

With the points practically assured, Italy produced a composed second-half showing in which retaining possession took precedence over creating opportunities.

And Greece could do little to instigate a turnaround, Georgios Masouras going close only to see an offside flag raised as the hosts' frustrations grew.

When substitute Manolis Siopis fired wildly over the bar from a decent position, it was clear that even a consolation goal was going to be beyond Angelos Anastasiadis' side.

What does it mean? Italy in cruise control

With a 100 per cent record from their opening three games, Italy are already five points ahead of third-placed Greece and look well set to qualify.

Mancini's men have not yet conceded a goal, which further underlines the strides they have made since failing to reach the 2018 World Cup.

Greece struggled in general to contain Italy in the first 45 minutes, but it was down the visitors' left side that the threat came, be it from Insigne or Marco Verratti. The former scored, the latter was typically industrious.

Dimitrios Kourbelis was perhaps more a symptom of Greece's first-half capitulation than a cause, but the way the game passed him by showed just how dominant Italy were.

After managing just 11 touches and seven passes, he was substituted at the break.

Greece remain in Athens to welcome Armenia on Tuesday, while Mancini's men host Bosnia-Herzegovina in Turin on the same night.