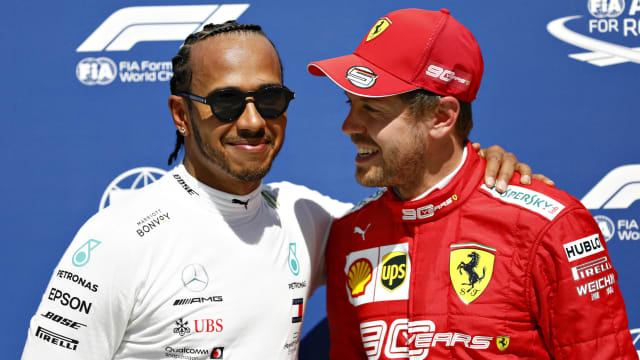 Lewis Hamilton believes Mercedes could have the race pace to trouble Ferrari at the Canadian Grand Prix despite Sebastian Vettel recording a scintillating pole position.

Vettel, who won last year's race in Montreal, will be on the front row of the grid at a Formula One race for the first time since July 2018 for Sunday's race after going top of the timesheets in the final moments of qualifying, leaving championship leader Hamilton second.

That is a good omen for the German, as the pole-sitter has won the last four races at Circuit Gilles Villeneuve, a high-speed circuit which appears to suit the SF90. His team-mate Charles Leclerc will also be in the running from third.

Victory for Vettel would end a run of 14 completed races without winning, the worst run without the retirements of his F1 career, after he had to dispel speculation he was contemplating quitting F1 going into the weekend.

But in Hamilton he has a formidable Canada rival - the Briton has six wins there, making it the joint-most successful race of his career along with China, Hungary and the United States.

If he makes it seven it will not only become his best personal track, but also match Michael Schumacher's record of triumphs at the circuit.

"I don't feel disappointment, we gave it everything I had," Hamilton said after qualifying. "They were faster and in the last sector they were killing us.

"The timing was right, procedures were perfect, we had P1 for a second, but we knew they were quick.

"On the straights is really where we lost it. All weekend they are just pulling so much in the straights. In the race conditions, maybe that's different."

It's the first pole of the season for Seb

And just LISTEN to how much it means to @ScuderiaFerrari#CanadianGP  #F1pic.twitter.com/9H6e0eQRSj

Part of Hamilton's positive mood may relate to the fact he is well placed to extend his world championship lead, given closest rival and team-mate Valtteri Botttas – who is 17 points adrift – qualified a poor sixth.

"To be back up here was a really great recovery from myself and mechanics, considering where we were," added Hamilton, who crashed into a wall in Friday's FP2.

"I'm actually really happy for Seb. He clearly did a really great lap. My first lap was really good and it felt great for a second to be on pole, particularly as I missed all of FP2. But it's been a real solid day from us.

"I'm glad I was able to split the Ferraris. The weather is fantastic, we've got some great fans here so hopefully we can put on a great show."

Daniel Ricciardo was a superb fourth for Renault as he looks well placed to get at least the six points he needs to pass the 1,000 mark in F1.

Pierre Gasly will start fifth ahead of Bottas, who will be grateful his poor qualifying showing came here rather than on a track like Monaco where it is harder to overtake.

One concern for Mercedes, though, is their upgraded engine, which they began using this weekend and was also supplied to their customer teams.

He told Sky Sports: "We have lots of concern about the engine problem [for Stroll], we don't know yet what really happened, it just went up in flames. It was a brand new engine on an out lap and we need to investigate and cross our fingers that it doesn't happen on our cars.

"Seb did a stunning lap and deserves to be on pole. Lewis picked up a couple of mistakes in the hairpin and that is why it wasn't enough – we would have given them a good fight."

VERSTAPPEN SET TO CHARGE THROUGH FIELD

Max Verstappen is always a man to watch, but he will be especially so on Sunday after initially qualifying 11th, largely due to Kevin Magnussen's crash at the end of Q2 meaning he could not set a final time.

"I'm not down, it happens," said the Dutchman, who has finished in the top four at every grand prix this season.

"We are not really on pace of Mercedes and Ferrari so it will be difficult to fight them but I will give it my all to gain a few positions."

Verstappen got a much-needed boost after the session, though, with a three-place grid penalty for McLaren's Carlos Sainz and confirmation of a pit-lane start for Magnussen meaning the Red Bull star edged up the grid to ninth.

We were just very unlucky with the red flag in qualifying. That’s how it goes sometimes. It means I’ll have a bit more work to do tomorrow. I will give it my all to have a good race and gain a few positions #KeepPushing#CanadianGP pic.twitter.com/TbiAgWrCQk

A rain-free race is in store, with sun, hot temperatures and a gentle breeze forecast for Sunday in Montreal.