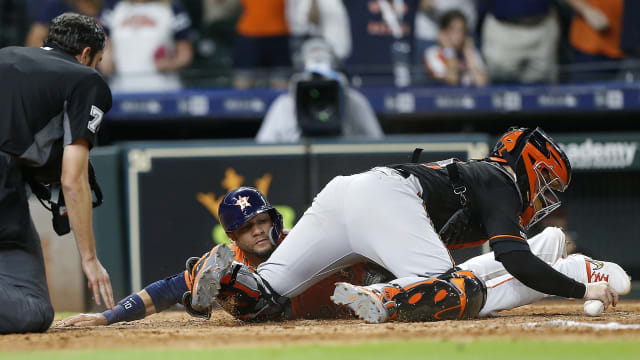 The Houston Astros claimed another extra-inning victory, this time against the Baltimore Orioles 4-3 in MLB on Friday.

One day after defeating the Seattle Mariners in 14 innings, the Astros (44-21) flew back to Houston and defeated the Orioles in 11, but they had a little help in the process.

With the game tied at 3-3 in the 11th inning, Robinson Chirinos doubled to left with Yuli Gurriel on base.

The not-so-fleet-of-foot infielder then trucked around the bases and was waved around to go score, probably incorrectly.

The throw to the plate was in plenty of time to grab him too, but there is a reason the Orioles are 19-44 this season, not a ton is going right for them.

And on this play, it simply came down to catching the baseball, which as a catcher, Chance Sisco has some experience in.

The problem is he did not catch the ball and Gurriel was able to snake his way to home plate to score the winning run.

The play neatly summed up the season for both teams. Houston found a way to win again despite being without Jose Altuve, George Springer and Carlos Correa. And the Orioles found a way to lose because it is just really difficult for them to win right now.

David Peralta went three for four with a home run and two RBIs in the Arizona Diamondbacks' 8-2 win over the Toronto Blue Jays.

Marwin Gonzalez went four for five with an RBI in the Minnesota Twins' 6-3 victory against the Detroit Tigers.

Jose Urena gave up six earned runs on 11 hits in three innings of the Miami Marlins' 7-1 loss to the Atlanta Braves. He also gave up a home run to Ronald Acuna which really has to sting. Kind of like an unnecessary beanball.

Winker with the catch!

Jesse Winker made an amazing catch in foul territory in the Cincinnati Reds' 4-2 defeat against the Philadelphia Phillies.

The Cardinals seem to have weathered the storm that was the month of May and sit three-and-a-half games back of the National League Central Division-leading Cubs. Jack Flaherty (4-3, 3.76 ERA) has gotten through a bit of a sophomore slump to open the season and has given up three earned runs or less in each of his last seven starts. Jon Lester (4-4, 3.32) bounced back from three bad starts to toss seven innings of one-run ball his last time out.