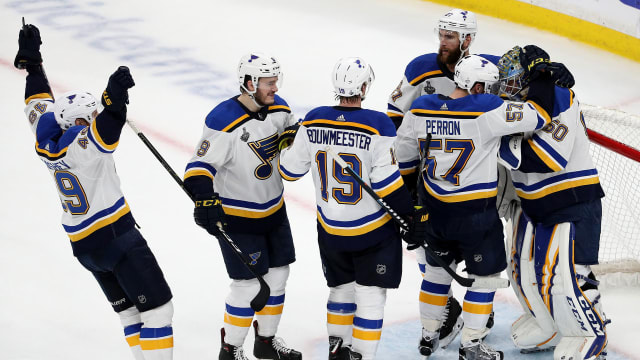 The St Louis Blues are one win away from their first championship after edging the Boston Bruins 2-1 on Thursday.

Thanks to goals from David Perron and Ryan O'Reilly and 38 saves from Jordan Binnington, the Blues defeated the Bruins in Boston to take a 3-2 lead in the Stanley Cup Final.

The game was not without controversy, though.

On Perron's goal, Tyler Bozak appeared to not be called for a trip on Noel Acciari, which led directly to the Blues finding the back of the net.

Here are three takeaways from the Blues' Game 5 win.

Referees point of discussion once again

It simply keeps happening. Game after game after game in these Stanley Cup playoffs, the referees are becoming the focus. In the Western Conference semi-finals, the Colorado Avalanche had a game-tying goal disallowed on a controversial offsides, then in the Western Conference Finals, the San Jose Sharks scored against the Blues immediately following an uncalled hand pass.

Now, in Game 5 of the Stanley Cup Final, the Blues took a critical 2-0 lead after Bozak appeared to get away with a trip on Acciari.

Goal No.  of the #StanleyCup Playoffs for @DP_57 holds up as the game-winner. pic.twitter.com/SWCmr9N5Bj

O'Reilly has not put the puck in the net all that much this postseason. Coming into Game 5 he had five goals in 23 games and that might get some to suggest he has not been all that good.

While O'Reilly has been very good in the passing game, assisting on 13 goals in 23 games, his defense has truly been where he has excelled. That was glaringly evident in Game 2 when Patrice Bergeron was rendered virtually useless and it has once again been on display in Games 4 and 5, which the Blues have controlled much of the way.

O'Reilly's greatness cannot be measured by how many goals he scores, but that does not mean he cannot put the puck in the net. In fact, he was the player to break the scoreless tie in Game 5.

The second period begins with some great chances from the Blues, and then Zach Sanford and Ryan O'Reilly connected for this beauty. #stlblues#WeAllBleedBluepic.twitter.com/dX5i9ebO65

In Game 2, the Blues let the Bruins get going with a power-play goal on their first chance. In Game 3, they allowed them to score four times in four power plays on four shots.

Over and over again, it was said the Blues had to be better against the Bruins' power play to get a leg up in this series. Well, in Game 4, St Louis held Boston to 0 for two on the power play, and in Game 5, they held them to 0 for three.

It is not a coincidence the Blues won those two games. On prime scoring opportunities, St Louis kept the Bruins from scoring. That is how teams compete and win.

Maria Sharapova ready for life after tennis as she announces retirement