Gagai double leads Maroons back to Origin I win 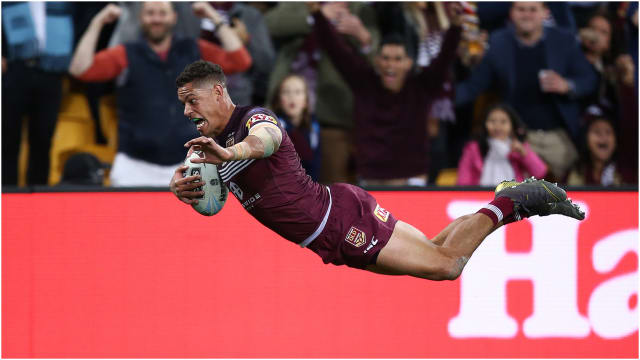 The Maroons lost the series for the first time since 2014 last year, yet they took a big stride towards reclaiming the bragging rights in a tense Game I victory on Wednesday.

NSW had been beaten in 10 of the past 12 Origin matches played at Suncorp Stadium but dictated the play early on, scoring the only try of the first half through Josh Morris as Queensland were wasteful on the counter-attack and scoreless at the interval.

However, roared on by the Brisbane crowd, the Maroons were rejuvenated after the restart and Corey Oates crossed before Latrell Mitchell's yellow card put Kevin Walters' men in control.

Gagai ran the length of the field to score moments before Mitchell's return and the same man soon crossed again to seal victory despite Jake Trbojevic's late riposte.

Guess who's back again

A frenetic start saw few openings at either end, before the Blues gained a foothold and kicked the first points of the game with Nathan Cleary's 13th-minute penalty goal.

Oates stepped out of play in making a spectacular lunge over in the corner, while NSW were also denied in a desperate scramble.

But it was not long before Morris got the opening try as the influential James Tedesco created space between Oates and Michael Morgan for the centre to step through, with Cleary stretching the scoreline to 8-0.

The Maroons failed to capitalise on a lucky bounce off the goal post as Dylan Napa knocked on before grounding the ball, yet they were much improved following the break.

A try was awarded the second time Oates dived through in the corner, before Kalyn Ponga's brilliant kick brought his side back to within two.

The momentum was with Queensland and, moments after Morgan failed to get the ball down in a tussle with Tedesco, Mitchell was sent to the sin bin for halting Matt Gillett early.

The Maroons opted to go for the posts, with Ponga levelling the match 20 minutes from time, and they finally led with Gagai's stunning breakaway try after a slack Jack Wighton pass.

Ponga's kick faded wide, but he then picked out Gagai with a superb pass to all but clinch victory in the corner, this time executing the conversion.

Trbojevic muscled over and Cleary dispatched the kick to set up a nervy finish, yet brave defence from Ponga and Ben Hunt saw Queensland safe.