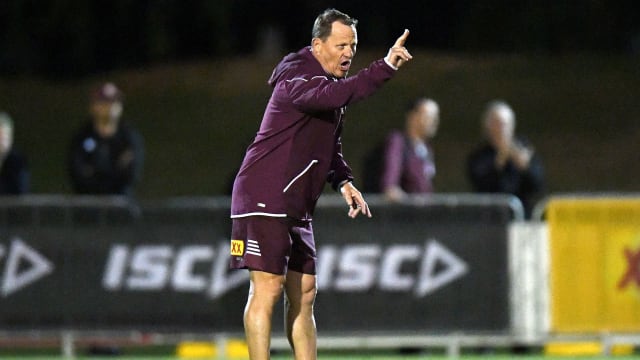 Kevin Walters dismissed a suggestion he has "lost the plot" by turning to a 'coach whisperer' in Queensland's bid for State of Origin glory.

Walters has recruited Bradley Charles Stubbs, who worked with NRL champions Sydney Roosters last year, to offer some words of wisdom as the Maroons attempt to regain the Origin title.

Stubbs, also employed by Michael Maguire when he was in charge of South Sydney Rabbitohs, is said to have advised that the words "New South Wales" and "Blues" should be banned in the Queensland camp.

Maroons players have reportedly been fined for failing to adhere to that advice, with some members of Walters' squad referring to their rivals as "the other team" when facing the media.

Coach Walters defended his use of Stubbs on the eve of the opening match of the series at Suncorp Stadium on Wednesday.

"I'm Kevvy Walters. I love Queensland, I love rugby league, and I love this Queensland side," Walters said when pressed on Stubbs' role.

"No, I haven't lost the plot. My wife thinks I have sometimes. I'm really excited the energy and all the focus this week has been about us.

"We appreciate what the other side can do, we're not silly. But we know what we can do.